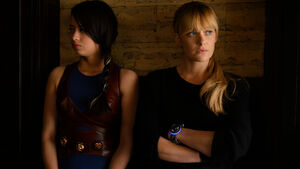 You should never have come...

In the past, Charles Xavier arrives in Morocco to meet Farouk. Farouk sent a driver carrying a portrait of Charles he painted himself to pick him up from the airport. Charles finds numerous mute children and a caged monkey at Farouk's estate. Farouk introduces Charles to the Astral Plane, another plane of existence where psychics like the two of them can make reality to their will. Farouk shows Charles and the children a shadow play about a tyrant who was stopped by a hero armed with only the magic phrase "You should never have come." Meanwhile, David has traveled into the past to warn his father about Farouk. Switch is unable to join him due to the extreme stress so much time travel has placed on her body. David only faintly appears to Charles in the theater, but is barely able to warn him about Farouk's lies. Later, Charles looks inside the mind of the monkey, and finds the mind of the king from Farouk's story.

Syd, Kerry and Cary travel through the time stream, and they arrive at Charles and Gabrielle's home while Gabrielle was left alone with the infant David. Gabrielle welcomes the three of them into her home when they assure her they are real. Once Syd realizes who Gabrielle and her baby are, she comes up with a plan to raise David better so he might turn out differently. She also realizes David's condition might be genetic when Gabrielle talks about her mother and grandmother's own sicknesses. Syd tries to convince Gabrielle to go along with her plan, but Gabrielle still doesn't seem certain that Syd is even real. Time Eaters attack the house, trapping Kerry and Cary in time before they approach the infant David in his room. Syd saves David from the Time Eater, but several more of them pour into the house through its basement furnace.

David appears to Charles in full in Farouk's estate. Charles looks inside his mind to see David is his infant son as an adult. To keep their conversation safe from Farouk, David takes Charles to a room inside the Astral Plane surrounded by doors. David shows his father all the horrible things Farouk has done to him by giving Charles a piece of cake representing knowledge. David tries to prepare his father to take on Farouk so he will do more than just expel Farouk's consciousness from his body only for it to take root in the infant David's mind. In the physical world, David poses as a soldier so he and Charles can fight and kill Farouk together. Farouk realizes David is a powerful psychic and excuses himself from their conversation before David can attack.

Suddenly, a wounded and exhausted Switch stumbles into Farouk's estate. Time Eaters take time away from the three of them, so David and Charles suddenly find themselves watching over Switch as he lies down on a bed. David takes Charles back into the room in the Astral Plane to explain what's going on, but his frustration all of it and his father's insistence that there is a more peaceful way to handle Farouk cause the other voices in his head hiding behind the doors to take over. One by one, the other Davids confront Charles, wanting justice (or revenge) for how he abandoned his son when Farouk entered his mind. Charles uses his own psychic powers to escape David's mind.

Back in the real world, one of Farouk's child subjects asks Charles to quiet the voices in her head. Charles, who is still surprised to see the children can talk after all, looks inside the girl's head, and Farouk turned the children into prisons for the king's supporters. Horrified by this knowledge, Charles finds David and agrees to help him kill Farouk. Meanwhile, the present-day Farouk escapes from the Space Between Time through a painting in his past estate so he and his past self can take on David and Charles together.

Like this? Let us know!
Retrieved from "https://marvel.fandom.com/wiki/Legion_(TV_series)_Season_3_7?oldid=6497496"
Community content is available under CC-BY-SA unless otherwise noted.