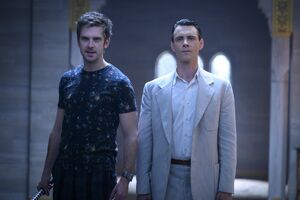 Lessons in Time Travel, Chapter Zero: Who we were does not dictate who we will be. But often, it's a pretty good indication. Time travel does not give one the opportunity to change oneself, but rather to eradicate oneself and allow something else to form in the wake of what once was. And in this is a sort of grace, or madness. Because if we don't believe in change, then we don't believe in time.

David and Charles prepare to take on Farouk by creating weapons out of their psychic energies. They find the two Farouk's - the one from this time and the one from the present - talking to each other. David, almost without hesitation, attacks the past Farouk by pulling him into the Astral Plane, leaving his father to deal with the Farouk from David's time. At Charles and Gabrielle's home, Syd and Kerry try to protect Gabrielle and the infant David from the Time Eaters. Syd realizes this is what David does that destroys the world. Cary lets Kerry absorb him into her body so their dual timelines can confuse the Time Eaters. Kerry rapidly ages as she fights them, while Syd tries to hold them off with a shotgun.

In the Astral Plane, the legion inside David's head swarms Farouk. Although they overwhelm him at first, Farouk throws the David's off him, leaving only the real David trapped in a straitjacket. Farouk berates David by telling him he is not deserving of love. David sees a vision of his mother while Syd and Kerry fight the Time Eaters that lets David regain his strength. David throws the straitjacket off him, revealing it to be Farouk. David moves over Farouk's body and prepares to strangle him. Meanwhile, Charles pulls the Farouk from David's time into the Astral Plane. Farouk, disappointed with Charles' lack of imagination, easily disarms Charles. Instead of turning Charles' knife against him, however, Farouk turns the knife into a drink for Charles before creating another one for himself. Over their drinks, Farouk confesses that over the 33 years he was trapped inside David's head he grew to love the boy as if he were his son. While he admits his past self's sinister reasons for bringing Charles to Morocco, his own intentions are to help David.

Switch, still badly wounded from over-extending her powers, finds herself surrounded by Time Eaters. She pulls herself and her bed into the Time Stream, but the Time Eaters follow her. Switch prepares to meet her end when her father, Xiu, suddenly throws the Time Eaters off her before seemingly healing her. Xiu reveals that they are four-dimensional beings native to the time stream. The Time Eaters are like dogs who obey him and guard the time stream from would-be invaders. He could only communicate to his daughter through a television screen because he had to reduce himself into a simpler form to exist in the physical world. Now that Switch understands the nature of time - that is an ocean, not a river, too powerful for any one being to control - she is ready to cast off her physical body and join her father in existence untethered from time. Before she joins him, however, there is one more thing she must do.

Charles and the present-day Farouk stop David from killing Farouk. The Farouk's disappear into another part of the Astral Plane, leaving David alone with his father. Although David is furious that he would stop him from killing the monster who ruined his life, Charles explains that he made a deal with Farouk to respect each other's existence. Charles admits he was wrong to abandon David as a baby when he needed him and his mother most, and embraces his now-sobbing, grown son. Meanwhile, the past Farouk accuses his future self of becoming soft in his old age. The present-day Farouk shows his past self the horrors he put David through by placing his dark sunglasses on his face, and the more of it he sees the more he grows increasingly remorseful for what he hasn't even done yet.

Now that David, Charles and Farouk have changed David's past, Switch calls the Time Eaters away from Syd, Kerry and Gabrielle. She tells Syd that her past changed with David's, and that the person she is now will soon disappear. Switch gives Syd enough time to do one last thing before saying wishing her goodbye. In Morocco, Switch watches as Farouk says farewell to David, sealing their deal to leave each other alone. With their goodbyes, Switch is finally ready to join her father. Back at Charles and Gabrielle's house, Kerry and Cary - now roughly the same age for the first time since they were children - embrace each other one last time before they disappear. Charles tells Gabrielle about what happened in Morocco, and promises to stop travelling and fighting so the two of them can raise David together. Standing over the baby's crib, David and Syd speak to each other one final time. Syd asks for one last thing from him - to be a good boy. They disappear, leaving the infant David to have a normal life.

This is the series finale of Legion.

Retrieved from "https://marvel.fandom.com/wiki/Legion_(TV_series)_Season_3_8?oldid=5636624"
Community content is available under CC-BY-SA unless otherwise noted.