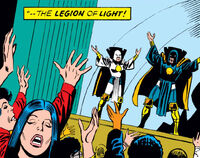 The Legion of Light was a secret religious group led by Brother Power and his wife Sister Sun. The Legion of Light and it's followes would spurn all their worldly possessions. They followed the message that light and love was power. Brother Power was once an owner of a restaurant in Ho Chi Minh City, Vietnam who used his place as a front for smuggling and espionage. He was on a country expedition when he encountered the Man-Beast who granted him power in exchange for loyalty. He created the organization from there and slowly recruited followers.

Brother Power and Sister Sun would later battle Spider Man during one of their ceremonies in Central Park after Flash Thompson discovered that Sister Sun was his ex-girlfriend Sha-Shan.

Retrieved from "https://marvel.fandom.com/wiki/Legion_of_Light_(Earth-616)?oldid=5548406"
Community content is available under CC-BY-SA unless otherwise noted.