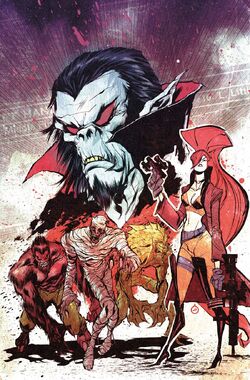 The Legion of Monsters were united by chance when they each investigated the appearance of a strange being called the Starseed. Though Starseed was a benevolent entity, both the Werewolf by Night and Morbius, overcome by their monstrous hungers attacked it. Ghost Rider and Man-Thing attempted to intervene, but Starseed was unable to overcome his fear of Man-Thing and suffered severe burns at its touch. The dying Starseed attempted to cure the Legion of their monstrous forms but was too weak and died little later.[1]

Tired of fighting and disappointed in their actions the team split up. Though they hardly ever acknowledged themselves as a team in the first place, the Legion of Monsters (minus Ghost Rider) reunited. This incarnation included Morbius, Werewolf, Man-Thing, and new members Living Mummy and Manphibian.[2]

They vowed to protect monsters that were hunted down to be killed. One of their missions included saving remaining monsters from the Hunter of Monster Special Force. They sent the monsters into the Morlock Tunnels and started a Monster Metropolis where the monsters could live in peace. Recently they saved the Punisher after he was killed by Daken and brought him back to life as FrankenCastle.[3]

He was since returned to his normal form and left the team.[4]

Retrieved from "https://marvel.fandom.com/wiki/Legion_of_Monsters_(Earth-616)?oldid=5548409"
Community content is available under CC-BY-SA unless otherwise noted.