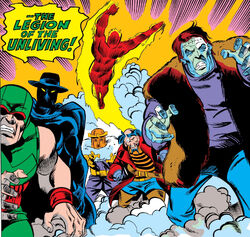 Team Aliases
Battalion from Beyond

Base of Operations
None. The Legion of the Unliving is only active for short periods at a time and are usually only active in an area where they're directly engaging their enemies (usually the Avengers).
Affiliations

The Legion of the Unliving was initially formed by Kang the Conqueror and his alternate self, Immortus. They extracted beings from their home time periods or they resurrected them, intending for their presence to poise a psychological offensive either due to their emotional ties to their opponents or simply the suggested supernatural nature of their existence. The group would later be recreated by the Grandmaster, and later by the Grim Reaper.

The first Legion was created by Kang after he and yet another of his alternate selves, Rama-Tut, was rescued from the void of time by Immortus. Entrapping both of them, Kang used Immortus' devices in conjunction with the mercurial nature of the realm of Limbo to pull super-powered beings out of time shortly before their destined deaths; Baron Zemo, the Frankenstein Monster, Midnight, the Flying Dutchman's Ghost, the original Human Torch, and Wonder Man. Dubbing this group of people the Legion of the Unliving, as they were all at least supposedly dead by the time he choice to attack his enemies, Kang had them fight against the Avengers, who were also brought to Limbo. Despite deaths on both sides of the conflict, the Legion was defeated and Kang fled back into the void of time to escape capture, leaving Immortus free to regain control of Limbo. Restoring all participants back to their original state, Immortus had the Avengers stay behind to explore the shared natures of the Torch and the Vision while the Legionnaires were returned to their origin points to face their respective destinies.[1]

Immortus would later create his own team, by then the third iteration of the Legion of the Unliving, in Limbo to face off against the West Coast Avengers. Wishing to use deceased enemies of the assembled Avengers, Immortus called upon the villainous modern Black Knight, the Grim Reaper, Iron Man 2020, the Left-Winger and Right-Winger, Oort the Living Comet, the Swordsman, and the original Torch's old sidekick, Toro. This group was mostly meant as a distraction to keep the Avengers busy while Immortus concentrated on his intentions to transform the Scarlet Witch into a living power conduit by which to increase his control over time, and were believed all to be simulacra so many of the present heroes resorted to lethal tactics to defeat them. This time, Immortus had the Legionnaires vanish once he felt they were no longer necessary, perhaps too soon as he was ultimately defeated and suffered the fate he had intended for the Witch.[2]

Retrieved from "https://marvel.fandom.com/wiki/Legion_of_the_Unliving_(Kang)_(Earth-616)?oldid=5474739"
Community content is available under CC-BY-SA unless otherwise noted.