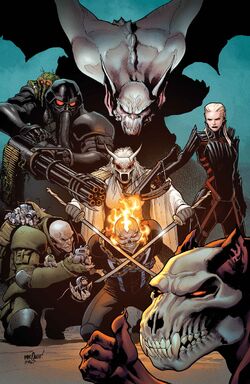 The Legion of the Unliving was brought together by Dracula with the purpose to feign an uprising in his kingdom. They were led by Dracula's son Xarus, adopting the identity of the mysterious Shadow Colonel. Under their pretense of contesting Dracula's throne, the Legion of the Unliving massacred other vampires, with the objective to weed out the weakest members of the vampire race.

During an attack on Castle Dracula, the Avengers assisted the Romanians in the surroundings of the castle, who were threatened by fleeing vampires. The Shadow Colonel turned himself over to the Avengers and was taken to the Avengers Mountain. In addition to goading the Avengers' newest recruit, the vampire-hunter Blade, the Shadow Colonel only surrendered himself over so that Sarge could infiltrate the base and take possession of the Ghost Rider with a demonic recitation.[1] With the Ghost Rider in their ranks, the Shadow Colonel and Sarge had him scold them away on his Hell Charger.[2] In the meantime, Dracula had used the attack on his castle as a pretext to seek political asylum in Russia, presenting himself with a weak and feeble appearance.[1] He offered all his knowledge in exchange for a piece of land where he could purportedly spend his final days in peace.[3]

The Legion of the Unliving continued their crusade in Madripoor, where they were intercepted by the Avengers.[2] The vampires managed to escape while the heroes were occupied confronting and ultimately freeing the Ghost Rider from Sarge's influence.[3] The Legion of the Unliving fled to Russia, where they turned all the prisoners of the Sol-Iletsk Federal Penal Colony No. 9 into vampires to build up the ranks of the new kingdom. The Avengers came to stop the vampire outbreak, and Blade wounded Xarus during battle, severing his right leg and right arm before eventually decapitating him. The Legion of the Unliving escaped with Xarus' body and head, since he had remained responsive after being decapitated. Sarge was left behind, having been defeated by the Avengers' own canine ally, Thori. The Legion met with Dracula in Chernobyl, which was the territory the Russian government had granted him, and where he intended to set up his new domain.[4]

Retrieved from "https://marvel.fandom.com/wiki/Legion_of_the_Unliving_(Vampires)_(Earth-616)?oldid=5548426"
Community content is available under CC-BY-SA unless otherwise noted.