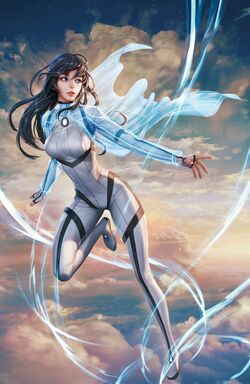 Aero was a Shanghai agent who went beyond her jurisdiction into the North Pacific as she got this feeling like there was something wrong with the wind. Aero ended up in a confrontation with Triumph Division operative Wave who also felt a disturbance with the water. A whirlpool formed in front of them and Aero was bewildered by what had caused it. As she checked it out a plateau of fiery land rose from the ocean knocking Wave and Aero unconscious as Fire Demons of Muspelheim rose with the island pronouncing they had divided and conquered the two women.

Aero finally came around after being contacted by her people about Shanghai being under attack. She figured that they had been tricked by the demons who pronounced that their queen sensed Aero's elemental power and decided to lure her away from her homeland so she wouldn't be there to protect it. Just when Lei was going to get an answer about who they were, the demons were killed by the fire goddess "Tūtū Pele."[2]

Aerokinesis: Lei Ling can sense, generate and control wind. Her wind has the power of a hurricane. Her powers are linked to chi.[3]

Like this? Let us know!
Retrieved from "https://marvel.fandom.com/wiki/Lei_Ling_(Earth-616)?oldid=6507114"
Community content is available under CC-BY-SA unless otherwise noted.