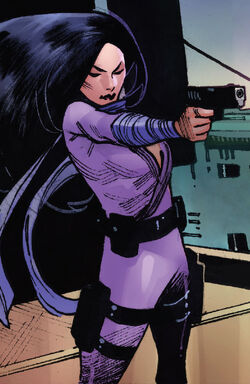 Leiko Wu is an agent of MI-6. While working there, she began a relationship with Clive Reston, but left him for Simon Bretnor, who turned out to be the assassin Mordillo.[2]

She continued to work with MI-6 against Fu Manchu, alongside Fu's son and her new love interest Shang-Chi and her former lover Reston, which often caused tension within their group.[3] Being a MI-6 agent and ally of Shang-Chi, she helped assault Fu Manchu's Arctic Mountain Fortress,[4] and stop his plan to knock the moon out of orbit and later foil his plan to manipulate the nations of the world into World War 3.[5]

During Shang-Chi's retirement, she and Reston married. Upon the return of Fu Manchu whom was thought dead, she once again aided Shang-Chi as part of a MI-6 force in assaulting the Hellfire Base and putting a stop to Fu Manchu's plans.[6] Later, she infiltrated the Triads in the United Kingdom as part of an MI-6 operation. According to the Triad leader Skull-Crusher, Leiko fell in love with him and left Reston and MI-6 for him and the Triads.[7]

Leiko rejoined MI-6 and reunited with Shang-Chi, informing him that his father's organization was active again. Leiko assisted Shang-Chi in dealing with his long lost sister Sister Hammer over their power struggle for leadership of the Five Weapons Society and defended London with Shang-Chi and his half-siblings Brother Sabre and Sister Dagger from Hammer and her army of jiangshi.[10]

Leiko later bribed Shang-Chi with gelato to get him to steal the Equinox Blade from the British Museum because the magical blade had drained the soul of a security guard but MI-6 couldn't get involved so a free agent was needed. Leiko guided him through the security via a camera attached to his lapel. Lady Deathstrike attempted to steal the sword as well and used it to take the souls of the security guards but Shang-Chi was able to stop her by punching her out the window. He then broke the sword which released all the souls of the security guards that had been stolen and returned them to their bodies. The next day, Leiko treated Shang-Chi to gelato again.[11]

Supernatural powers since her resurrection.[9]

Like this? Let us know!
Retrieved from "https://marvel.fandom.com/wiki/Leiko_Wu_(Earth-616)?oldid=6167619"
Community content is available under CC-BY-SA unless otherwise noted.