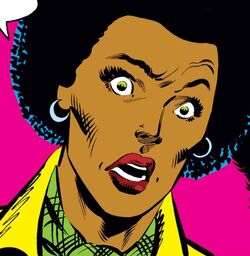 Leila Taylor was a long-time romantic interest and confidant of the Falcon. She was one of the first people to know his true identity. Leila was quite concerned with equal rights for all Americans regardless of the color of their skin.[3]

Leila accompanied the Falcon to Wakanda when he and the Black Panther were designing his new Wings. However, she grew bored and was taken shopping abroad by the Black Panther's staff. The criminal Stoneface spotted the attractive Leila, killed the Panther's security squad, and took her hostage. [4]. She was rescued by the T'Challa and the Falcon in the first test of his new "wings" [5].

She was kidnapped by the Night People to lure the Falcon to them[6] and then brainwashed into believing she was one of them. She returned to Earth along with the rest of the Night people when their home was overun by fire-breathing monsters native to the dimension it had been transported to.[1][7]

Leila and Sam Wilson broke up at a certain point. Most recently she worked as a reporter exposing illegal drug smuggling into the United States.[8]

Like this? Let us know!
Retrieved from "https://marvel.fandom.com/wiki/Leila_Taylor_(Earth-616)?oldid=6430205"
Community content is available under CC-BY-SA unless otherwise noted.