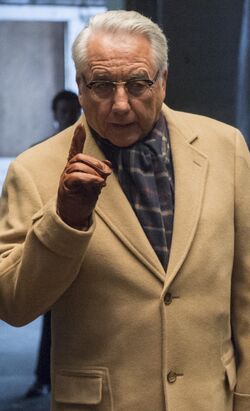 Leland Owlsley was an accountant allied with Wilson Fisk via James Wesley.[1] After Fisk started dating Vanessa Marianna, Owlsley and Madame Gao feared that Fisk wouldn't remain unaffected by emotions. The two allied and deviced a plan to try to kill Vanessa, by means of poisoning a handful of drinks that were being served at a charity party Fisk was attending with her.[2]

After Madame Gao had left New York, Leland confronted Fisk, who had already discovered some irregularities in his records. Owlsley admitted the blame for stealing money from Fisk as well as trying to kill Vanessa, but he revealed a piece of information to prevent Fisk from killing him. Owlsley had kept Carl Hoffman, a dirty cop who could blow Fisk's operations wide open, in hiding as a leverage. Despite this, Fisk killed Leland out of rage.[3]

Retrieved from "https://marvel.fandom.com/wiki/Leland_Owlsley_(Earth-199999)?oldid=6074397"
Community content is available under CC-BY-SA unless otherwise noted.