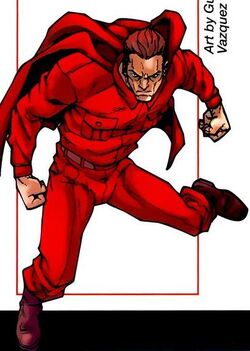 The Invisible Man was just one of many costumed operatives active during World War II who were recruited into the United States military. The purpose was to enlist such individuals in order to publish propaganda in the form of comic books that were commissioned by the United States military and published by Timely Comics. These comics were used to convince Americans to support the war, and increase enlistment. Like many heroes recruited in this fashion, the Invisible Man's fictional exploits were few. For most of these early heroes it was due to their deaths in combat.[2]

Presumably, much like the Young Allies[3], the fictional exploits of the Invisible Man may be based on actual events. For the sake of clarity, however, his article differentiates between the two.

Leonard Gade was a man devoted to helping mankind with his scientific ability, creating his inventions for the sake of humanity instead of his own personal gain. This earned him the ire of rival scientist George Sporvan who hired an assassin to push Gade into his chemical furnace. Instead of burning alive, the combination of chemicals instead caused Gade to turn invisible. Realizing that exposure to specific vibrations caused him to turn invisible and visible at will, Gade decided to get revenge against his would-be killers. Tracking the assassin back to Sporvan's office, Gade attacked them invisibly. Revealing himself, he then tricked Sporvan into shooting one of his accomplices by turning invisible again. Fleeing the police, Sporvan deduced that Gade would return to his lab and rushed ahead of him to wait there. Sporvan deduced correctly, and although he succeeded in rendering Gade visible again, the vengeful scientist reactivated his vibration machine, turning invisible once more. Then, before the shocked eyes of the police, Gade tossed Sporvan onto his active disintegration device, killing Sporvan. Not aware of Gade's presence, the police wondered what happened but eventually left with the mystery unsolved. Gade then decided to use his powers for the good of mankind.[4]

When criminal "Deadpan" Louie began a series of grave robberies to steal buried jewellery, Leonard decided to use his powers to stop this ghastly crime. He tracked down and attacked the graverobbers, forcing them fleeing. By this point, Gade's identity as the Invisible Man had become public knowledge, and Louie and his men capture Gade and drove him into the river in a car to drown. Gade escaped his watery tomb and decided to allow them to believe he had died. He then had a false story put into the newspapers about how a valuable secret was being buried with his body. Hiding out in his coffin, Gade waited for Louie and his men to dig up his fake grave. Catching them off guard, Gade easily defeated them and turned them over to the authorities.[5]

In his last recorded solo adventure, Gade investigated the supposed suicide of actress Janet Wayne. During his investigation, he overheard another actress claim that Wayne was badgered into killing herself. Deciding to watch over the actress, he learned that the mobster "Fatty" Lloyd was responsible for the intimidation. In his initial attempt to stop them, Lloyd and his men left Gade to burn to death in a fire; however, the Invisible Man managed to escape and follow after them invisibly. When Lloyd later captured the actress and took her out to his yacht to be killed, the Invisible Man followed. Catching the crooks off guard, Gade knocked them into the shark infested waters to be eaten alive, and while escaping with the actress, he set Fatty's yacht to explode.[6]

At some point, Gade's invisibility powers became part of an obsessive fascination to him, and Gade was constantly in a state of flux between visibility and invisibility.

He was drafted into the United States military following the United States entry into World War II in late 1941. He was recruited into the Specialized Unit, Enhanced Soldiers also known as the Crazy Sue's, under the command of Captain America and Sargent Byrd. In August 1942, the Invisible Man and the Crazy Sues were air dropped over Guadalcanal where they clashed with the Imperial Japanese Army.[2] They continued to fight in the region throughout that month, often the group was under heavy fire, requiring their teammate Captain Flame to use his powers to save them.[7]

The unit was pulled from the Pacific Theater and relocated to Europe in 1944. Gade and his comrades were then air dropped over the village of Sainte Sainte Mere Engiles to participate in the Battle of Normandy. After their victory, the Crazy Sues celebrated with the Invaders.[8] In June of 1944, Gade was teamed up with the Blue Diamond on a secret mission behind enemy lines. They were captured by the Nazis and interrogated. When Blue Diamond refused to talk about their mission, their interrogator then began torturing Gade to force the Blue Diamond to talk. They were soon rescued by the Young Avenger and Taxi Taylor.[1]

In July of 1944, the Invisible Man joined the Crazy Sues in battling Nazi forces in France, taking part in the liberation of the country from Nazi occupation. By August, the Crazy Sues were once more under the command of Captain America and led into Belgium. There, they clashed with Nazi forces once more, and during the battle, Gade was struck through the ankle by enemy fire, requiring medical attention. Captain Flame once again saved his comrades from their enemies by using his powers to decimate their attackers.[9]

Gade's subsequent activities in the Crazy Sue's is unrecorded[10], however evidence suggests he died during the war.

Invisibility: After exposure to a mixture of unknown chemicals, Leonard Gade would gain the ability to turn invisible at will, through changing his bodies vibrations. While being rendered invisible would bend light rays to accomplish this task, how Gade managed to retain his eyesight is unrevealed.

Gade was a brilliant scientist and inventor

By initial accounts, Gade's powers required to be recharged by his experimental generator; otherwise, he would be trapped in whatever state (whether visible or invisible) until he could recharge. The amount of changes Gade could undergo and the length of time before the charge wore off is unrevealed.[4]

However, when with the Crazy Sues, Gade did not appear to require any devices to change his state, but he appeared to have limited control of his powers as parts of his body constantly phased in and out of the visible spectrum.[2]

Gade had a specially made belt that would trigger his transformation between visibility and invisibility. It contained a small charge that was similar to the large experimental generator that recharged his abilities.

Gade had a disintegrator weapon that would break down an object to stray atoms upon contact.

Like this? Let us know!
Retrieved from "https://marvel.fandom.com/wiki/Leonard_Gade_(Earth-616)?oldid=6435095"
Community content is available under CC-BY-SA unless otherwise noted.