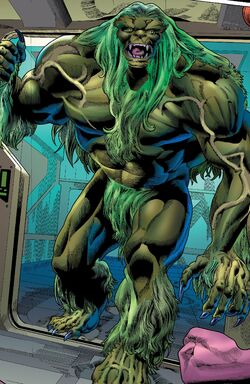 Leonard Skivorski, Jr. was born and raised in Tulsa, Oklahoma. He was of Jewish descent and regularly attended yeshiva.[9] He was the son of Dr. Leonard Skivorski, Sr. a successful psychiatrist in his own right. His father specialized in treating young women and had affairs with them. His was nicknamed "Samson" by his wife because of his long hair.[10] Leonard at first wanted nothing to do with psychology, but in college like his father he gained a PhD in psychology.[11]

He came to General "Thunderbolt" Ross with a plan to cure Ross's daughter Betty, who had been transformed into a crystalline form[3] through a blood transfusion with Sandman.[12] Samson had technicians devise a Cathexis Ray projector that would drain off gamma particle energy and psionic energy from Bruce Banner as he transformed into the monstrous Hulk whom General Ross had long hunted. Samson theorized that as a result of this process, Banner would be cured of the physiological instability that continually transformed him into the Hulk. Hoping to save Betty and to be cured himself, Banner willingly participated in the experiment. The cathexis ray succeeded in turning Betty Ross back to normal, employing Banner's psionic energy.[3]

However, most of the psionic energy drained from Banner (as well as a considerable amount of his excess gamma radiation) remained within the cathexis ray projector. Motivated by scientific curiosity, and probably by a subconscious desire to gain superhuman powers for himself, Samson irradiated himself with the energies remaining within the projector. The result was that the slim, brown-haired psychiatrist was transformed into a massively-muscled, green-haired superhuman with Gamma-boosted strength. Banner himself seemed permanently cured, but he broke emotionally under the strain of seeing Betty, the woman he loved, being romanced by Samson. Banner then exposed himself to Gamma radiation, thereby undoing the cure. Samson then fought the Hulk, being defeated in his first real superhero combat, but Betty sympathized with the weaker Samson much to the Hulk's chagrin.[3]

Samson later lost his superhuman physique and power when he took a blast of concentrated gamma radiation intended for the Hulk.[13] However, months later Samson regained his gamma-mutated form and superhuman strength when he was bombarded by intensive radiation from an exploding gammatron, an experimental gamma-ray generator.[14] He has remained in this form ever since. "Doc" Samson, as he has been nicknamed, has long sought to capture and permanently cure the Hulk. Samson worked as a teacher at the Evanston campus of the Northwestern University during the recent time that the Hulk was traveling through different dimensions, unable to return to Earth. However, Samson often neglected his academic duties and returned to his pursuit of the Hulk once the monster reappeared on Earth.[15]

Doc Samson was also briefly the Director of Ravencroft Institute, a facility for the criminally insane, following the removal of Doctor Ashley Kafka as head of the facility.[16]

During the Superhuman Civil War Samson joined the Registered heroes and fought against the Secret Avengers.[17] Shortly afterwards, the Hulk returned to seek revenge on the Illuminati, who exiled him to space. Doc Samson helped evacuate the people of New York. Then he battled the Hulk and the Warbound. He was defeated by the Warbound and imprisoned.[18]

Following the Skrull invasion, Doc Samson led a support group meeting with those that had been replaced by Skrulls.[19] Later, on Air Force One, he attempted to disclose the full activities of Norman Osborn within Thunderbolts Mountain to the new United States President. Before Samson was able to play the evidence, Osborn's new Thunderbolts hijacked the plane: the Ghost took the evidence, Eric O'Grady implanted a gamma-emitter on the back of Samson's neck causing him to grow angry and more powerful in a Hulk-like manner, and someone wearing the Green Goblin's costume attacked the airplane.[20] Samson's increased anger caused him to attack the President, but he was phased out of the plane by the Ghost. Osborn reasoned that, in his enhanced state, Doc Samson probably survived the fall, and released a global warrant for his arrest, suggesting that Samson attempted to kill the President.[21]

A new Red Hulk appeared, and revealed that Bruce was no longer comatose, and was being imprisoned by the US military.[7] However, the Helicarrier crashed near New Jersey.[22] Tony Stark ordered Maria Hill to investigate and search for survivors. Clay Quartermain's corpse was found mangled and ravaged, and the area bathed with gamma radiation. General Ross and Samson's bodies were missing. Leonard's coat was found ripped and shredded in a Hulk-like fashion, exhibiting higher Gamma Radiation values than every other item in the wreckage.[23]

M.O.D.O.K. placed Samson under mind control producing a split personality. This led to a powerless Leonard who was defined as the good one and an evil Samson whose abilities are greater than She-Hulk's. Samson shot Rick Jones and dragged him away after he attempted to reveal who the Red Hulk really was.[5] He then engaged She-Hulk in combat but it was cut short by M.O.D.O.K. who fired a laser, knocking both unconscious and reverting Samson to Leonard. A battle between Red Hulk and Hulk caused an explosion.[24] After the Red Hulk depowered the true Hulk, Samson double crossed Red Hulk to punish him for his disobedience.[25] Afterward, Samson's darker persona took control once again, under M.O.D.O.K.'s surveillance.[10] Reverted, Doc Samson was killed attempting to help a returned Hulk contain all of the Gamma radiation from the Hulked-Out Heroes.[26]

Doc Samson was among the many deceased resurrected during the Chaos War, along with Glenn Talbot, Hiroim, Jarella, Rebecca Banner, the Abomination, and Brian Banner, who had the ability to transform into a replica of the Devil Hulk at will. They returned to the realm of the dead afterwards, with the exception of the Hulk's mother.[27]

Samson eventually returned to life due to his nature as a gamma mutate and their connection to the mysterious Green Door. Tormented by the meaning behind his return and feeling purposeless, Samson kept a low profile and refrained from contacting his closest friends. During this time, the second superhuman civil war took place and Bruce Banner died at the hands of the archer Hawkeye as part of a form of assisted suicide. Following the death of Rick Jones, Samson contacted Betty Ross.

Banner returned to life again not long afterward, and Samson set out to find him in search for answers regarding his own immortality.[28] Moments after Betty had been shot by an operative of the covert Shadow Base, Samson confronted the Hulk at the scene,[29] meeting latest alter in control, the meticulous and vicious Devil Hulk, who shared with Samson his vision to tear down the human world for their abuse of the environment. Together with the Hulk, Samson investigated Shadow Base and the disappearance of Rick Jones' body.[28] When they reached the abandoned Shadow Base Site A, Samson was shot down by Bushwacker, the operative who had killed Betty.[30] He returned to life after the Hulk had collapsed the facility and left, and was picked up by the task force Gamma Flight on their way to investigate the Hulk.[31] Samson joined Gamma Flight in tracking down the Hulk, and at the scene of a battle between the Hulk and a mutated Rick Jones, they retrieved the mutagenic Gamma-Activated Tissue after the Hulk dug up Rick from it.[32]

In order to retrieve the gamma tissue, the Shadow Base's commander, Reginald Fortean, assaulted Gamma Flight and killed Samson in the process.[33] After Samson had returned, Gamma Flight retaliated against Shadow Base,[34] involuntarily joining forces with the Hulk and his allies when his raid on Shadow Base coincided with Gamma Flight's incursion.[35] In the aftermath of the confrontation, Banner seized command of Shadow Base and repurposed it for his and Devil Hulk's vision. Doc Samson defected from Gamma Flight in order to keep an eye on the Hulk.[36] As part of his efforts, the Hulk waged war against Roxxon.[37] Samson aided him in fighting giant monsters unleashed by Roxxon in Phoenix, Arizona,[38] and also in stopping Xemnu's mind control over the United States.[39]

Following Xemnu's defeat, the Hulk's popularity skyrocketed, but he eventually fell to the scheming of the Leader, who had already taken control of Rick Jones.[40] The Leader also took control of Del Frye, a gamma mutate in custody of Shadow Base, and used it to wreak havoc while the Hulk was away.[41] Using Frye, the Leader killed Samson, plunging him into the Below-Place, a layer of Hell through which Gamma mutates travel between death and resurrection. The Leader had used the Green Door to take control of Jones, Frye, and the Hulk. When Samson's own Green Door manifested, the Leader somehow affected it to turn it into a Red Door, preventing Samson's return to the land of the living.[42] When the Leader was distracted from controlling so many beings at once, Samson took the opportunity to strike him with a piece of debris, inflicting a severe head injury. As Leader cursed him, Samson ran off.[43]

Unable to resurrect into his own body due to the Leader's meddling with the Green Door, Samson managed to resurrect into the body of the deceased Walter Langkowski aboard the Alpha Flight Low-Orbit Space Station, resulting in him becoming a green-haired version of Sasquatch. He reunited with Gamma Flight and Jackie McGee and told them how the Leader had been manipulating events behind the scenes. Samson and Gamma Flight then confronted the Joe Fixit persona in Banner's body. However, Joe Fixit was able to escape by destroying one of the space station's windows and escaping into outer space. Samson prevented anyone else from being sucked out into space.[44]

Later, Samson went with Puck and Shaman to retrieve his body from Shadow Base Site G so he could return to it and leave Walter Langkowski's body. As the three entered Los Diablos Missile Base where Site was built below, they witnessed Rick Jones and Del Frye, who were forcibly merged, emerge from belowground.[45] Samson immediately attacked the pair out of the belief that they were still under the Leader's control and due to the fury from Sasquatch's body. Doc Samson eventually stopped when he realized that Rick and Frye weren't fighting backing.[46]

Doc Samson is a skilled psychiatrist, said to be one of the most renowned on Earth.[49] He is also an M.D. as well as a PhD.[6] He has used a nutrient bath to separate Banner and the Hulk[50] and placed a rem-integrator in the Hulk's head to put him to sleep.[49] While he's had no formal training, his powers make him a formidable hand-to-hand combatant. He typically uses street fighting techniques that allow him to make full use of his strength.

Like this? Let us know!
Retrieved from "https://marvel.fandom.com/wiki/Leonard_Samson_(Earth-616)?oldid=6214368"
Community content is available under CC-BY-SA unless otherwise noted.