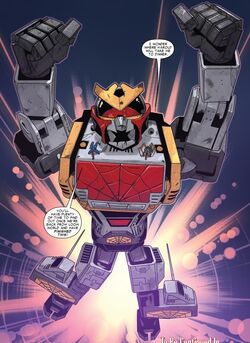 Origin
A giant robot from the Planet Spider

Leopardon, you have returned! I knew you were invincible!

Leopardon was a giant robot that Spider-Man used to defeat his enemies.[1]

Later Takuya was recruited into the Spider-Army. He used Leopardon to oppose Solus, but the robot was easily destroyed by Solus' Cosmic Power.[2] Its remains were recovered by Lady Spider and Spider-Man 2099, who rebuilt it and augmented its weaponry using nuclear material.[3] It was present in the final battle with the Inheritors, where it was reunited with a joyful Takuya.[4] In the aftermath of the war, Leopardon was last seen with Takuya overlooking Mayday Parker return to her world, afterwards Leopardon and his master returned home safely.[4]

Takuya and Leopardon where called upon again to join many other Spider-Man in a fight with Solus and The Inheritors.[5] When Spider-Man and Superior Spider-Man came to recruit him, he was fighting another giant monster. At Superior Spider-Man's request, Takuya had Leopardon use his strongest weapon, Sword Vigor, immediately to end the fight. Leopardon later attacked the skyscraper of the Inheritors to help the Spider-Men there escape.[5] In the final fight with the Inheritors, Daemos broke into Leopardon and caused the robot to crash in order to prevent Takuya from using Sword Vigor against Solus. It made no difference since the new Captain Universe, Miles Morales was able to use the sword and kill Solus with it.[6]

The Marveller is the spacecraft that Garia came to Earth with. It is 45 meters tall and weighs over 25,000 tons. It is usually stored underground and surfaces by cracking the ground whenever Spider-Man summons it. The ship's bridge is shaped like a leopard's head, which is where Leopardon's head is stored, and opens left and right when transforming into robot mode (when it becomes Leopardon, the bridge is located inside its back).[citation needed]

Although it's shape might not seem suitable to fly within the Earth's atmosphere, it has the capability of flying at a speed of Mach 15. It is capable of flying to outer space at the speed of light. Because Marveller is usually transformed immediately into Leopardon whenever Spider-Man boards it, it is rarely seen in spacecraft mode. The Marveller is primarily equipped with cannons on its bow, which are capable of destroying most Machine BEMs.[citation needed]

Leopardon is a giant robot that the Marveller can transform into. It is over 60 meters tall and has a weight of over 25,000 tons.[citation needed]

Leopardon is equipped with the following types of weapons, which are used accordingly to the situation.

Retrieved from "https://marvel.fandom.com/wiki/Leopardon?oldid=5593930"
Community content is available under CC-BY-SA unless otherwise noted.