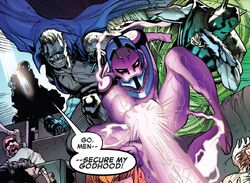 This incarnation of the Lethal Legion was organized by Count Nefaria as part of a plot to gain super powers. He sent Power Man, Living Laser and Whirlwind up against the Avengers after boosting their powers with a machine invented by Professor Kenneth Sturdy, but they were unaware that each use of their increased abilities hastened the process of transferring them to Nefaria himself. The Legion were left weakened and were easily defeated by the Avengers.[1]

Nefaria reassembled the Lethal Legion many years later, with the Grey Gargoyle replacing Power Man, when he sought to use the Catalyst, an energy source developed by Project P.E.G.A.S.U.S.. After employing the Chameleon to copy all the research notes from the doctor who discovered the Catalyst, the Lethal Legion raied the Project P.E.G.A.S.U.S. Facility to kill him to avoid anybody using his knowledge to stop Nefaria.[2]

The Lethal Legion next attacked Empire State University, where the Catalyst was being exposed for a public demonstration. The Lethal Legion's massacre of spectators was interrupted by Spider-Man, but he was overpowered by the villains. When the murderous vigilante Sin-Eater arrived on the scene, he murdered all four members and Count Nefaria, gaining the approval of the bystanders. Due to his new supernatural nature, the Sin-Eater stole the powers of each member of the Lethal Legion when he killed them. Furthermore, all four Legionnaires and Nefaria returned to life shortly afterward, filled with a new-found sense of repentance for their crimes. The Legion and Nefaria were subsequently incarcerated at the Ravencroft Institute, where they became model patients.[2]

Retrieved from "https://marvel.fandom.com/wiki/Lethal_Legion_(Count_Nefaria)_(Earth-616)?oldid=5696977"
Community content is available under CC-BY-SA unless otherwise noted.