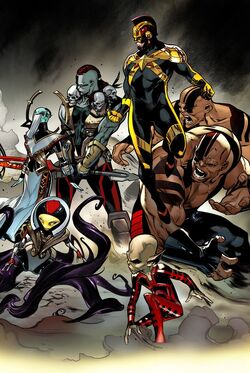 This iteration of the Lethal Legion was assembled by the Grandmaster to fight on his behalf against his challenger's Black Order.[2] Each member was plucked from a deadly situation, and would only be allowed to live if they bested their opponents. Otherwise, the Grandmaster would return them to certain death.[3]

The objective of the contest was to each round secure a set of Pyramoids placed by each team's rulers somewhere on Earth, which served as the battleground.[2] Before the contest formally started, both teams were teleported to Earth in order to survey it. However, both butted heads as soon as they reached the planet. The confrontation was cut short by their masters, who reminded them they were not to fight yet.[4]

When the contest started, both teams were divided in half to confront each other in order to secure the Pyramoids. The Blood Brothers, Mentacle and Metal Master fought Supergiant, Black Dwarf and Black Swan in Rome, Italy while Captain Glory, Drall and Ferene the Other faced Ebony Maw, Proxima Midnight and Corvus Glaive in Cusco, Peru. Both confrontations were intercepted by the Avengers.[5] The Pyramoid in Rome was obtained by the Black Order's Black Dwarf, while the Human Torch of the Avengers seized the other.[2] Anyone who touched a Pyramoid was seemingly disintegrated, but was actually teleported to the Grandmaster's Cosmic Game Room without anyone's knowledge. With the round over, both teams left.[6]

For the second round, only Ferene the Other travelled to one of the Pyramoid sites, Antarctica, and secured the device after one of the groups of Avengers had routed the Black Order.[7] The rest of the Lethal Legion attempted to retrieve the Pyramoid from New Mexico,[3] but were stopped by the other group of Avengers.[1] Mentacle used her powers to obfuscate the Avengers' vision in order to give herself and Captain Glory a widow of opportunity to escape, since all of their other teammates had been knocked down. As they were making their escape, they were intercepted by the Challenger's secret player, the Hulk. After he broke Glory's spine, Mentacle tried to reach into his mind to no avail, and was taken down by the monster.[8]

Following the end of the contest and the Avengers' victory over the Challenger, the Lethal Legion regrouped and escaped to Knowhere. Since they all were facing near-death situations when the Grandmaster recruited them, none of them had nowhere to return. They decided to stay together and see what could their combined power accomplish.[9]

Retrieved from "https://marvel.fandom.com/wiki/Lethal_Legion_(Grandmaster)_(Earth-616)?oldid=5686857"
Community content is available under CC-BY-SA unless otherwise noted.