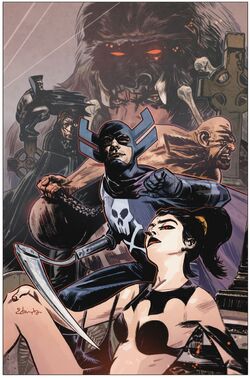 Origin
Assemblage of individuals who wish to destroy the Avengers

The Lethal Legion was a super-villain team gathered by Grim Reaper to defeat the Avengers. They captured Black Panther after having kidnapped his girlfriend Monica Lynne, but were defeated after Grim Reaper freed the Vision, having discovered that he possessed his brother Simon's brain-wave patterns.[1]

The Reaper later reformed the Lethal Legion in partnership with Ultron to attack the West Coast branch of the Avengers.[2][3]

During Norman Osborn's Dark Reign, Reaper reformed the Legion with super-villains who had vendettas with Osborn, along with his brother Wonder Man. After they were defeated it was revealed that Reaper was acting under Osborn's orders in order to make Osborn's Avengers look better than the original Avengers.[4]

Retrieved from "https://marvel.fandom.com/wiki/Lethal_Legion_(Grim_Reaper)_(Earth-616)?oldid=5548448"
Community content is available under CC-BY-SA unless otherwise noted.