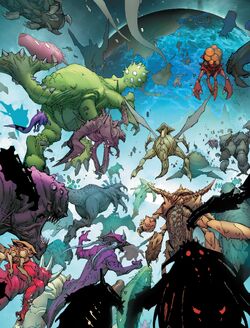 The Leviathon Tide is an assembly of monsters controlled by the Leviathon Mother which raze planets to act as nests for their queen.[1]

One of the planets targeted by the Leviathon Mother was inhabited by a group of Universal Inhumans (Kymellians and Centaurians) and aliens they had helped settle. An Inhuman warrior attempted to use her powers to summon monsters independent of the Tide to fight against them. The resistance proved to be futile, and the Tide emerged triumphant in the end. The planet was devastated and it became the Leviathon Mother's desecrated nest.[1]

A few thousand years later, the Leviathon Mother awoke from her slumber and directed the Tide towards Earth. A handful of monsters started landing on the planet heralding a bigger invasion. The Tide encountered heavy resistance in the form of the Avengers, the X-Men, the Champions, and many more heroes.[2] These heroes, however, were struggling to defeat the Tide and prevent civilian casualties as the Leviathons continued to arrive in bigger numbers and shorter periods of time.[3]

Suddenly, many Goliathons (monsters who had attempted to conquer Earth decades before) appeared,[3] having been summoned by the Inhuman Kei Kawade and managed to defeat the biggest Leviathon congregation in San Diego, California. Upon hearing of this defeat from her servitors, the Leviathon Mother gave the order to send all of the remaining Leviathons to Earth to crush the resistance.[1]

The rest of the Leviathons arrived to Earth, but the heroes and the Goliathons managed to fight back. The Leviathon Mother made earthfall herself in order to end with the life of Kei Kawade herself.[4] The monster mother proved to be no match for Kei and the combined force of new monsters of his own creation, prompting most members of the Leviathon Tide to abandon her and flee Earth. A few remained on the planet, some having been defeated and captured and others managing to hide around the world.[5]

Retrieved from "https://marvel.fandom.com/wiki/Leviathon_Tide_(Earth-616)?oldid=4539175"
Community content is available under CC-BY-SA unless otherwise noted.