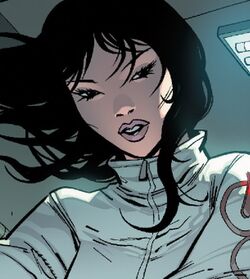 Lian Tang is a designer at the Shanghai branch of Parker Industries. She co-designed the latest Spider-Mobile with Peter Parker. While she and Peter are in an intimate relationship, she disapproves of Spider-Man's apparent insubordination, not knowing he and Peter are one and the same.[3]

She is in league with Scorpio, leader of the Zodiac, providing him Parker Industries' security codes in exchange for medication for her mother, who was sick with cancer. When Scorpio threatened to have her disposed of as a loose end, she offered to kill Spider-Man for him in exchange for medication. She attempts to kill Spider-Man during Shen Quinghao's award ceremony, but cannot go through with it. After learning the circumstances behind her attempted betrayal, Spider-Man forgives her and asks that she help him take Zodiac down.[4]

Like this? Let us know!
Retrieved from "https://marvel.fandom.com/wiki/Lian_Tang_(Earth-616)?oldid=6096315"
Community content is available under CC-BY-SA unless otherwise noted.