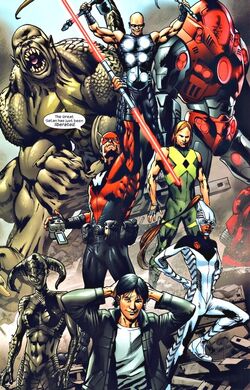 Base of Operations
Global
Affiliations

The Liberators were a multinational group of superpowered villains that invaded the United States of America. They had support, at least tacitly, from the governments of China, France, Iran, North Korea, Russia, and Syria. Various elements within those governments considered America a threat, but they could not hope to win a conventional war. Instead they put together a small but powerful strike force, which they could recruit, train, and deploy in secret. These "super troops" would occupy key cities and capture key personnel. To counter the American government's superpowered heroes (the Ultimates), the force included each country's version of a super soldier, a group they dubbed the Liberators, along with thousands of "foot soldiers" in battle suits that granted them flight and class three super-strength, but shortened their lifespan to one month.

The strike force through planning were able to severely weaken the Ultimates before the invasion even started. The Ultimates dropped Henry Pym from their roster, so out of revenge he contributed a set of Ultron robots to the strike force. The Hulk was thought to be executed after Bruce Banner was exposed as the Hulk. Loki through his powers over reality had convinced SHIELD that Captain America and Thor were traitors. The traitorous Black Widow gave many of SHIELD's secrets to the Liberators and arranged for the murder of the Barton family and the kidnapping of Hawkeye.

Their planning enabled them to succeed in the first days of the invasion. The invaders occupied key cities, bested the Ultimate Reserves, and made prisoners of the Fantastic Four, the X-Men, Spider-Man, the president, Quicksilver, and the Scarlet Witch. Only the Wasp remained at large.[1]

The plan began to unravel when Hawkeye escaped and freed Quicksilver and the Scarlet Witch. Iron Man learned that the Black Widow had betrayed the team and put her out of commission. The Wasp broke Captain America out of prison. The Liberators now had to do what the plan demanded: battle the Ultimates directly, on their own turf.[2]

In a battle royale, the Liberators found themselves no match for their American counterparts. The Hulk killed the Abomination; Captain America defeating Schizoid Man and stabbing the Colonel with his own weapon; Iron Man vaporizing the Crimson Dynamo; Quicksilver disintegrating Hurricane; and the Wasp, after becoming a giant, stomps on Swarm.[3] Perun later surrendered, making him the only survivor of the team. Loki attempted to use his powers to destroy the Ultimates and continue "World War III", but due to the intervention of Thor and his father Odin was himself defeated.[4]

In the aftermath, China and Russia distanced themselves from having any links with the Liberators and stated of offering both aid to a war-torn America and a "full investigation" of the Liberators.[4]

Retrieved from "https://marvel.fandom.com/wiki/Liberators_(Earth-1610)?oldid=5548458"
Community content is available under CC-BY-SA unless otherwise noted.