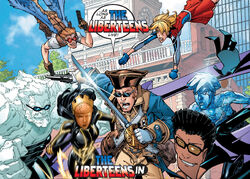 The Liberteens were formed as part of the 50-State Initiative as the Pennsylvanian team. They were based on the World War II team the Liberty Legion. Each member as a similar motif and power to a member of that team.[1]

Their first mission was to take down a group calling themselves Ultimatum, led by the new Flag-Smasher, which was apparently funded by Hydra and whose aim was to destroy the Liberty Bell as a symbolic gesture. The Liberteens managed to defeat Ultimatum with little trouble with Ms. America taking down the Flag-Smasher by herself.[1]

The Revolutionary was is in fact a Skrull infiltrator. He was involved in a plan to place a Skrull on every team in the Initiative. Eventually, the Skrull Kill Krew and a loosely organized band of Initiative members revealed the Revolutionary's true identity. They assisted Hope and Whiz Kid of the Liberteens in defeating him. Gravity dropped the diamond-skinned Hope on top of the Revolutionary and dramatically amplified her mass, crushing him to a bloody pulp. Hope stayed behind in Pennsylvania to help her wounded team members. Whiz Kid was later asked to join the Skrull Kill Krew in their search for the remaining Skrull sleeper agents among the other Initiative teams, but died saving the team by creating a tornado to suck away poisonous gas.[2]

The team apparently disbanded at an unknown point in time as members 2-D, Hope, Iceberg, and Ms. America came together to form a new team called the Fantastix.[3]

Like this? Let us know!
Retrieved from "https://marvel.fandom.com/wiki/Liberteens_(Earth-616)?oldid=5548459"
Community content is available under CC-BY-SA unless otherwise noted.