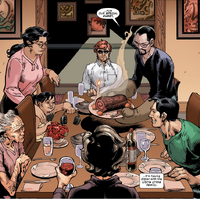 The Libris Crime Family were into gambling, counterfeiting, extortion, union shakedowns, and guns. It was a crime syndicate that never suffered any major arrests. Under the leadership of Isabelle Libris, narcotics stopped being part of their business, due to her daughter Michele having OD'd on drugs. The family was the one that sparked the war between the Irish and Italian families in the 1970s, which resulted in the family's small operation cementing itself in Hell's Kitchen.[1]

Retrieved from "https://marvel.fandom.com/wiki/Libris_Crime_Family_(Earth-616)?oldid=5568995"
Community content is available under CC-BY-SA unless otherwise noted.