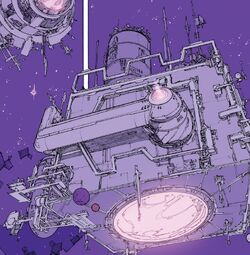 The Incubator was a machine created from the renmants of Galan's ship, and incubated him for eons until he was awakened as Galactus.[2] At some point billions of years in the past, the Incubator crashed into the young Ego the Living Planet, embedding itself in his core and beginning to drain his cosmic energy,[3] but it was removed by the time-displaced Silver Surfer. The Silver Surfer sought to change history by destroying the Lifebringer One and ending Galactus' reign of terror before it began, but was stopped by Uatu the Watcher and instead set it on a path to Archeopia.[4]

Upon arriving at Archeopia, Galactus emerged and consumed the planet, the Incubator escaping the lessened gravity. Drifting through space, it fell to Moroder-9 and its power was used by a warlorld. Spectrum and Ms. America of the Ultimates tracked down the Incubator, and brought it to Taa II, Galactus' ship. The devourer of worlds was trapped into the chamber against his will by the rest of the Ultimates, and using Neutronium, the process of the Incubator was accelerated.

When Galactus emerged once again anew from the machine, he had become the opposite of his previous nature, and was now a lifebringer.[5]

Like this? Let us know!
Retrieved from "https://marvel.fandom.com/wiki/Lifebringer_One_(Item)?oldid=6438974"
Community content is available under CC-BY-SA unless otherwise noted.