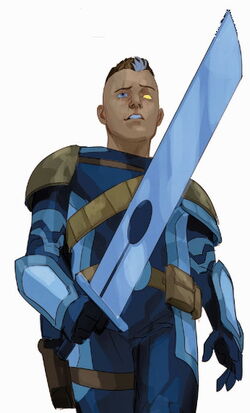 Sword in the stone, stationed in space. A young man, born old, pilots a place.

The Light of Galador was a powerful Plandanium sword formerly belonging to the Galadorian Spaceknights.

It was the weapon of one of the progenitors of the Galadorian Spaceknights called Morn who Cable pulled from the body of an Arakkoan monster appropriating it but was later claimed by the Spaceknights who arrived on Earth and attacked Cable and appropriating the weapon.[2]

After receiving a clue from Saturnyne and recruiting his parents to help, Cable travelled to the Peak and used the Light of Galador to power the space station.[3][1]

Like this? Let us know!
Retrieved from "https://marvel.fandom.com/wiki/Light_of_Galador?oldid=6488250"
Community content is available under CC-BY-SA unless otherwise noted.