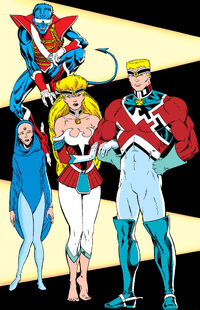 Lightning Force is the Earth-597 counterpart of team Excalibur.

Lightning Force consists of team leader Hauptmann Englande, the Earth-597 version of Captain Britain, and Meggan, Shadowcat, Nightcrawler. The team member's powers are similar to their Earth-616 counterparts, but - as Nightcrawler observed after their first meeting - their characters appear to be somewhat perverted and twisted, emphasizing the negative and dark characteristics of each Excalibur member. In addition, Shadowcat appears to be a ghost and her phasing powers not only disrupt electronics, but human life as well.[1]

Lightning Force operates in an alternate dimension where Nazi Germany won World War II. Charles Xavier had experimented on them before allow them to live and to serve the Reich.[2]

Reichminister of Genetics Moira MacTaggert and her bodyguard Callisto were travelling to London by Reichsrail England when their train was accidentally abducted to Earth-616 dimension by Widget. Lightning Force was sent after them in order to rescue them and to take them back to the Führer.[3]

First the team appeared at Excalibur Lighthouse where Shadowcat was ordered to kill Lockheed who was guarding the lighthouse when Excalibur was in New York during the Inferno Event. Lockheed survived, however. Lightning Force learned that Reichminister MacTaggert was held prisoner in the Tower of London and mounted an rescue attempt. The British government summoned Excalibur, who immediately returned from the X-Mansion where they had been examining Captain Britain's and Meggan's diminishing powers.[3] Both teams battled each other and finally Lightning Force would be subdued and put on trial.[4]

The jury decided that Lightning Force could not be called to account for their deeds they committed in the Earth-616 dimension and that they should be sent back to their own dimension - despite heavy protests from Kitty Pryde who was still traumatized by her tormented Earth-597 counterpart.[4]

When Lighting Force, Reichminister MacTaggert, Callisto and the Reichsrail train were taken to a portal into their own dimension, Moira MacTaggert - afraid of a military invasion - threw a grenade into the portal just after the exchanged Earth-616 versions of Moira MacTaggert, Callisto and the train staff stepped back into their own dimension. The portal collapsed and Lightning Force, the train and Excalibur disappeared.[5]

Later, when Earth-616 and Earth-597 were upon to merge, mixing the bodies and souls of each counterparts[2], Herr Xavier tried to contact the Lightning Force, feeling himself in danger but was unable to do it as the Excalibur were the dominants spirits in the Lightning Force's members' bodies.

During Mastermind's war against the Captain Britain Corps, Hauptmann Englande was captured by "Roma" and his Warpies Army, to find the localisation of the Excalibur's Sword. He was tortured and seemingly killed by the Cherubim Lump, who managed to extract the information directly in his head[6].

Retrieved from "https://marvel.fandom.com/wiki/Lightning_Force_(Earth-597)?oldid=5548473"
Community content is available under CC-BY-SA unless otherwise noted.