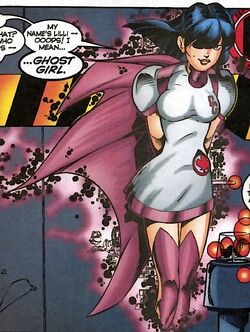 Lilli Stephens lived with her grandfather, a cattle farmer, until his death. She was then placed in the Hull House Orphanage in Orloo, Ontario. She was taught under strict discipline to obey orders and to learn to accept that some things are as they are and that she had no control over them.

It was there that it was discovered she had the ability to will herself into an intangible state by the headmistress, Mrs. DeLaSalle. Lilli was allegedly adopted by "The Smiths" but was, in fact, taken by Department H's Youth Acceleration Division's Coordinator Proctor. When she arrived at Department H, she was experimented on, tested, tattooed with a bar code and fitted for a costume to be a part of Alpha Flight.[2]

However, Lilli was slightly rebellious, wanting to return to Hull House and see her friend Claire. She attempted to run away multiple times. In her first attempt to escape she encountered Diamond Lil who thought she recognized Lilli.[3] She also bumped into Puck but he was unable to help her escape.[citation needed]

When the new chief of operations at Department H, Mr. Gentry saw to it that Lilli was given free reign through the complex and moved into the Alpha Wing, where she bumped into Flex. The two have become fast friends with a growing attraction. Lilli's first mission with Alpha Flight, under her guise of Ghost Girl, was against the third Weapon X.[citation needed]

Since that time, she became a full-fledged member of the new Beta Flight.[citation needed]

Intangibility: Lilli is able to become intangible at will, as well, she can make other matter intangible by touching it.

Like this? Let us know!
Retrieved from "https://marvel.fandom.com/wiki/Lilli_Stephens_(Earth-616)?oldid=5616590"
Community content is available under CC-BY-SA unless otherwise noted.