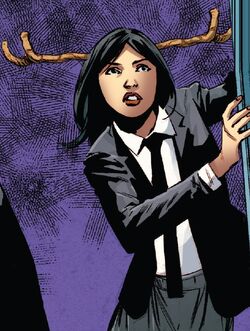 During her first day, Lin Li was on a tour of the school with Eye-Boy when Rockslide, chasing Bamfs through the hallways in an attempt to catch them, destroyed the canteen walls. Lin developed an immediate bond with the Bamfs, who tried to find safety from Santo Vaccarro on Lin's shoulders. Eye-Boy understood that her power consisted of controlling and bonding with animals, giving her the codename "Nature Girl". Lin remained apparently mute all day long, so she had no way of protesting Eye Boy’s choice of code-name for her. Shortly after, Krakoa greeted Lin with a flower, proving her to have an affinity with nature. Nature Girl developed a natural relationship with the Bamfs and Krakoa, and were frequently seen together.[2]

When Faithful John arrived at the Jean Grey School in order to kill Genesis before he could become the "next Apocalypse", he telepathically ordered the Bamfs to attack the students. To distract John and save her fellow teammates, Nature Girl commanded dozens of birds to fend off the Bamfs, giving Oya the chance to knock the villain out.[3]

When Kitty Pryde relocated the X-Men to Central Park and the school was renamed to the Xavier Institute for Mutant Education and Outreach, Lin Li decided to join in. She became part of Jubilee's team, which consisted of Nathaniel Carver, Quentin Quire, Benjamin Deeds, Bling! and Eye-Boy.[4] When a mysterious shadow in Central Park started stealing mutants during the night, Quentin convinced his classmates to investigate. They found themselves face-to-face with Emplate, who was possessing his sister Monet's body at the time.[5] After defeating the Rat King, Lin was freed from his possession.[6]

Lin and Trevor were tasked to babysit and protect Shogo. In order to do so, Nature Girl brought the two to the Central Park Zoo, inside the Bears' Den. Eye-Boy expressed his concern about Nature Girl's idea, babysitting Shogo surrounded by bears. Shogo had fun playing with the bears, when suddenly the bears sensed danger and roared viciously. Eye-Boy picked up Shogo immediately and carried him away. Eye-Boy asked Nature Girl what that was all about as they watched the bears go back inside their cave. Lin warned him that something was coming and that they needed to get back to the school fast. Indeed, somewhere underground, Emplate was currently hiding and feeding off one of the captured Morlocks. Eye-Boy, Shogo, and Nature Girl arrived at the school being carried by vultures and tried to warn the other students about what was coming to them. Nature Girl also informed Quentin Quire that whatever it was, was coming towards him.[7]

Monet, merged with her brother Emplate, arrived at the institute in order to try to kill the students and drain their life force. Jubilee, Husk, and Chamber battled the threat outside; inside the classroom, Roxy, Benjamin, Nathaniel, and Quentin came up with a plan on how to defeat him. A few days later, the team were preparing a surprise party for Roxy, who was going home to visit her family for a while. At the party, Trevor approached Lin, concerned about the bargain she made with the rats. Lin responded to him to not worry about it and added that if ever that time came, she promised that she will keep him safe. Kitty Pryde arrived to congratulate Jubilee on keeping her class alive.[8]

Nature Manipulation: Nature Girl's powers are directly connected to the natural world and thus she can communicate, influence, manipulate, and control nature: all living beings, plants, natural phenomena (such as the weather and geology of the Earth), and the matter and energy of which all these things are composed.[9]

Lin Li is shown to have a crush on Doop when he is teaching Advanced Mutant Sexuality at the Xavier Institute. She says he is "very handsome." [10]

Like this? Let us know!
Retrieved from "https://marvel.fandom.com/wiki/Lin_Li_(Earth-616)?oldid=6500869"
Community content is available under CC-BY-SA unless otherwise noted.