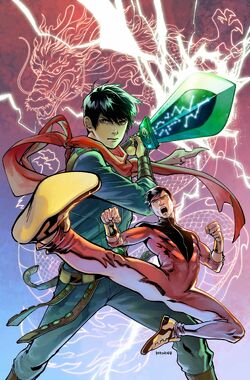 Lin Lie was a young man who lived with his father in Shanghai, China. One day his father and brother, Feng, disappeared after confronting a group of grave robbers in Quianfengou, but not before leaving a magical sword for Lie. Lie set out to search for his father while being pursued by Demons.[1]

Lie later joined the new Agents of Atlas during the War of the Realms. He stayed with the team while continuing to look for his father.[2]

While looking for his father, Lie encountered Shang-Chi, who tried to train Lie before someone attempted to steal the Sword of Fu Xi, a weapon which had caught the attention of Ares.[3]

Lin Lie is a skilled martial artist.[3] and quite expert in swordsmanship.[2]

Like this? Let us know!
Retrieved from "https://marvel.fandom.com/wiki/Lin_Lie_(Earth-616)?oldid=6471230"
Community content is available under CC-BY-SA unless otherwise noted.