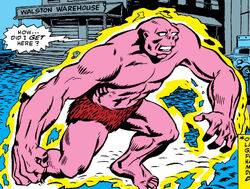 The origin of the Missing Link is largely unknown. He crawled out of a fissure in the earth after a Chinese atom bomb test. He was subjected to tests and experiments by soviet scientists, causing him to transform into his present, radioactive form. As he was too aggressive to be controlled, the Chinese decided to smuggle him to the US as a living bomb in order to destroy the Wall Street district[3] while the Chinese attempted to replicate the Link in controlled circumstances.[4]

In Wall Street, the Link clashed with the Hulk with the Air Force trying to capture them both, or at least Hulk.[3] General "Thunderbolt" Ross reluctantly asked S.H.I.E.L.D. for reinforcements, and Communist agent Yuri Brevlov impersonated S.H.I.E.L.D. and the Helicarrier, capturing Hulk and the Link with a Vortex Beam and escaping to orbit - for those were Brevlov's orders[4]

When the Hulk attempted to escape his own prison in the ship, he caused an explosion that broke the hull - affecting both his area and the one Link was at. Just then, the Link built up so much radiation that he exploded, damaging the ship beyond possible repairing - although the crew had time to evacuate in secondary ships. As the Link was dead, Brevlov considered his mission closed - even if he could still track the Hulk, but he didn't want to because the Hulk had just saved his life.[4]

The villain Leader discovered Hulk's past encounter with the Link. The Leader included the Link in an array of simulated super-villains he sent against the Hulk in an attempt to cause him a heart attack.[5]

The Missing Link had enough strength to go one-on-one against the Hulk and can withstand bullet impacts.[3]

He constantly broadcasts radiation, damaging anything he touches. He can also emit huge amounts of it at will to burn asphalt on touch. This radiation, when used against the Hulk, turned him into Bruce Banner but still with Hulk's mind - albeit only for a few minutes, after which Hulk returned to "normality".[3] The Link's touch also reverted Banner to Hulk form when Banner was affected by a machine that would supposedly have prevented that transformation.[4]

When building up too much radiation, the Link started a chain reaction in his body that caused him to explode spectacularly[4] - although he could rebuild himself with time.[6]

He cannot talk any contemporary language (but his sentences are translated in the comic-book explicitly for the reader's reference).[3]

Like this? Let us know!
Retrieved from "https://marvel.fandom.com/wiki/Lincoln_Brickford_(Earth-616)?oldid=5846861"
Community content is available under CC-BY-SA unless otherwise noted.