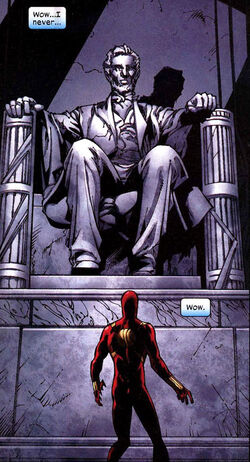 After Ken Wind's escape pod crashed over the Lincoln Memorial, John Garrett followed him and was fatally attacked by Arthur Perry, who was trying to protect the Beast's favourite. The cyborg super-agent was eventually defeated and terminated by Elektra, so Wind allegedly admitted defeat.[1]

Following Hydra's conquest of the United States, the Lincoln Memorial was among the American monuments that were destroyed and vandalized.[2]

After he was hit by the T-Gun and transported to Earth-6676, the Hulk found that Lincoln's statue was the only thing still standing, with the dust of ages on it.[3]

In Earth-14845, the Impossible Man had the ability to shape-shift anything he wanted to at will. When the Controller slapped a Slave Disc on him, the Impossible Man went crazy and turned the Lincoln Memorial into a statue of himself watching television.[4]

In an Unknown Reality, the Lincoln Memorial was left to decay.[5]

Like this? Let us know!
Retrieved from "https://marvel.fandom.com/wiki/Lincoln_Memorial?oldid=5327541"
Community content is available under CC-BY-SA unless otherwise noted.