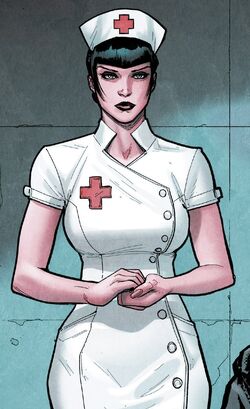 Thanks, but you're not the only doctor in the room. "Night Nurse" is just catchier than Night General Practitioner.

Linda Jane Carter was born in Allentown, New York, as the daughter of a doctor who maintained his practice there.[7] After graduating from medical school herself and becoming a registered nurse, Carter moved to New York City and began working at Metro-General Hospital with Christine Palmer and Georgia Jenkins. When she fell in love with and became engaged to the wealthy businessman Marshall Michaels, he gave her an ultimatum: marry him and leave nursing or stay at Metro-General. She chose to allow Michaels to leave and to continue pursuing her professional career.[6] During her time at Metro-General, Carter demonstrated that her skills were not limited to nursing practice, but also included detective and investigative work.[8]

At some point, Carter was rescued by a masked vigilante, and afterward decided to repay the superhero community by providing its members with medical health care.[1] To accomplish this, Carter assumed a secret identity of her own, calling herself "Night Nurse," and established a small private clinic hidden in Manhattan's Chinatown[5] on or near Orchard Street.[9]

The Night Nurse was dedicated to providing care to the entire super-hero community,[10][11] but she appeared to form particularly close relationships with Daredevil,[12] Captain America,[13] and Doctor Strange.[14]

She provided long-term recovery care for Daredevil after he was severely injured during a fight with the Yakuza.[12] Later, when Daredevil was shot by Paladin, he asked Elektra to take him to her clinic. Unfortunately, the Black Widow, the Hand, and F.B.I. agents arrived there too, culminating first in a battle and then in Murdock's arrest.[15] When a bloody, beaten Elektra arrived at Nelson, Blake and Murdock Law Offices after months of torture at the hands of the Skrulls, Murdock's legal-counsel partner, Franklin "Foggy" Nelson, enlisted the help of the Night Nurse in tending to Elektra's injuries.[16]

During the Superhero Civil War, the Night Nurse sided with Captain America and his anti-registration act Secret Avengers. She assisted operations from S.H.I.E.L.D. Safe House 23.[13][17] The Night Nurse was trusted enough to be invited to attend the secret wake for Captain America.[18]

After Doctor Strange was shot by Hitler's Handgun and left for dead by Brigand, Wong bought him to the Night Nurse's Hidden Hospice for emergency medical care.[1] When she learned that Brigand had stolen Otkid's Elixir, a magical potion capable of curing any illness, she insisted on accompanying Doctor Strange and Wong on their mission to recover it.[2] Their mission resulted in Wong almost being killed, the Night Nurse's clinic burning down, and the loss of nearly all of Otkid's Elixir, but it also fostered a romantic relationship between Doctor Strange and the Night Nurse.[19] The pair casually continued their romantic relationship[11][20] and even worked together,[21] but they eventually went their separate ways.[22]

The Night Nurse also aided numerous other individuals within the superhero community.[10][11] When Luke Cage was badly injured during Nick Fury's Secret War, Iron Fist and Misty Knight brought Cage to the Night Nurse's clinic to receive medical treatment.[23] The Night Nurse has also helped Araña with battle wounds,[1] Iron Fist with muscular strains,[1] Black Tarantula recover from being stabbed by the White Tiger,[5] Spider-Man with wound-closing stitches,[24] the revival and recuperation of Nomad,[10] and the administration of Firestar's chemotherapy treatments.[25]

Expert medical training and certification as a general medical physician[1][26] and as a registered nurse.[6]

Linda Jane Carter possesses the normal human strength of a woman of her age, height, and build who engages in moderate regular exercise.

The Night Nurse possesses the normal vulnerabilities, limitations, and weaknesses of any normal human without super-humanoid powers.

Retrieved from "https://marvel.fandom.com/wiki/Linda_Carter_(Earth-616)?oldid=6371687"
Community content is available under CC-BY-SA unless otherwise noted.