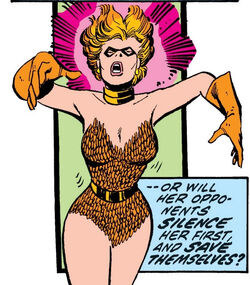 Linda Lewis was a famous pop-singer before an accident badly injured her vocal cords. They were replaced by Dr. Decibel using experimental bionics. The experiment restored Linda's vocal cords, but when she tried to sing instead she began using hypersonics. Her musical career was over, but she decided to use her new-found abilities as a crimefighter and joined the Squadron Supreme as Lady Lark.

She had an on-again, off-again relationship with the Golden Archer. Lady Lark was behavior modified by the Archer to love him and agree to marry him after she turned down his marriage proposal.[1] After the Squadron learned this, they forced the Archer to leave, although Linda still artificially loved him.[2] She mourned his death when he as the Black Archer was one of the dead after the Squadron and the Redeemers' battle.

Linda later adopted the wings of the deceased Blue Eagle and changed her name to Skylark in honor of her her new flight abilities. When the Squadron faced the threat of the Nth Man, she was transported with the rest of her team to Earth-616. The team based themselves at the government energy research facility Project Pegasus, and came under the telepathic influence of the Corruptor. As a result, they clashed with the Avengers and the Thunderbolts. Thanks to her new flight ability, Skylark became far more active in battle than she had previously been. After being freed from the Corruptor's influence and returning to her native dimension with the team, she was injured in reentry and was remanded to hospital care.[3]

Skylark possesses the normal human strength of a woman of her age, height, and build who engages in moderate regular exercise.

Skylark uses the wings and anti-grav harness formerly used by the Blue Eagle.

Like this? Let us know!
Retrieved from "https://marvel.fandom.com/wiki/Linda_Lewis_(Earth-712)?oldid=6007366"
Community content is available under CC-BY-SA unless otherwise noted.