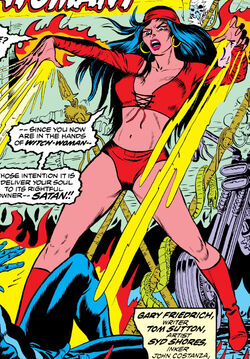 A member of a tribe of Apache Indians in Arizona, Linda Littletrees was accepted to an exclusive women's college and moved East to go to school.[citation needed]

While there she was introduced to Satanism by her roomate Jennifer, who convinced her that it was all harmless fun. She was tricked into attending a Sabbat and had her soul sacrificed to Satan before she could escape, as a result she became the Witch Woman. [citation needed]

A short while later, Linda returned to the reservation on a mission from Satan to defeat the Ghost Rider and capture his soul. Upon returning, she saved her father Snake Dance from an angry group of tribesmen who planned on hanging him for leading them down the wrong path. [citation needed]

This group was headed by Linda's own fiancee, Sam Silvercloud. After saving her father, Linda took the anti-venom needed to save Roxanne Simpson's life after she had been bitten by Snake Dance's snakes.[citation needed]

After overpowering the more novice Ghost Rider with her hellfire powers, Linda became careless as she recounted her own origins to the supernatural hero, giving him the chance to escape. Satan was furious over this and forced Linda to turn her powers on herself in front of the Rider to act as a warning. [citation needed]

Linda's comatose body was later found by Snake Dance and Silvercloud and they took to caring for her. Snake Dance recognized the signs of possession in his daughter and they contacted Daimon Hellstrom for help. Satan, meanwhile, took total possession over Linda's form and left, still seeking the Ghost Rider.[citation needed]

He/She succeeded in finding both Blaze and Roxanne and brought Blaze to the realm of Hell where he shed the body of Linda Littletrees. Blaze was saved by the timely arrival of the Son of Satan, who had been tracking Linda ever since she fled the reservation. Together the two supernatural heroes fought through the hordes of Satan and escaped with the body of Littletrees with them.[citation needed]

Once Linda recovered, she taught Blaze how to better control his hellfire powers, particularly how to create solid objects, such as his hellfire-spawned motorcycle. Littletrees later pursued Blaze, wanting him for herself, but Blaze was in love with Roxanne Simpson and told Linda to leave him alone. As a result, Linda later returned to the reservation and ended up marrying Sam, though she no longer really loved him. They had a son together and opened up a diner named "Linda's." [citation needed]

Years later, Mephisto once again approached Linda and asked her to become the Witch Woman, and she agreed. John Blaze again came across the Witch Woman during his road trip across the United States after Roxanne's death. He came across the couple fighting over custody of their son, Linda then attempted to seduce Blaze and told him that she was the victim. After Linda revealed herself as again being the Witch-Woman, Blaze learned the difference and shot her with his hellfire gun, after which she was taken in by authorities. Her present location and activities are unknown.[citation needed]

Solid Hellfire Manipulation: Witch-Woman possessed the ability to generate and manipulate Hellfire, as well as actual fire. Using this power she could form solid objects, drain the hellfire from a being of lesser power, and even open warps in space over a short distance. It was the Witch Woman who first taught the Ghost Rider how to create his flame cycle.

Like this? Let us know!
Retrieved from "https://marvel.fandom.com/wiki/Linda_Littletrees_(Earth-616)?oldid=5429152"
Community content is available under CC-BY-SA unless otherwise noted.