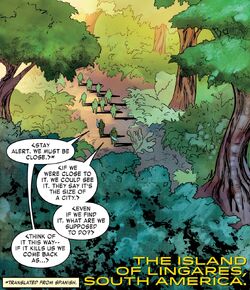 Lingares was an island in South America. When Ultimo slumbered in its caverns, he was awakened by M.O.D.O.K. in an attempt to control him. Once he failed to contain Ultimo on his own, M.O.D.O.K. approached the locals on the pretense of offering help, and used dead countrymen to build an army of Deathloks. However, the cyborgs turned against M.O.D.O.K. since they had embraced the values of the robot revolution. They continued trying to confront Ultimo, but with the intention to destroy him so M.O.D.O.K. didn't get his hands on it.[1] When they couldn't overpower Ultimo, the Deathloks began abducting living people to force into their ranks.[2]

Force Works operative Mockingbird had been deployed to inflitrate local guerillas and investigate the threat level posed by A.I.s in this region, and reinforcements were sent for her after a nuke went off as part of M.O.D.O.K.'s attempts to stop Ultimo, leaving the entire island in the dark. When the rest of Force Works arrived to investigate, they were overwhelmed by the Deathloks[1] and taken prisoner. They managed to break free and help the Deathloks' other prisoners escape.[2]

M.O.D.O.K. approached Force Works and helped them kill Ultimo, but he usurped the robot's decapitated body for himself to become UltiM.O.D.O.K. After being forced to retreat, Force Works contemplated in putting in action the Poseidon Protocols, which entailed having Quake use her powers to sink the island, but they refused. Force Works eventually managed to defeat UltiM.O.D.O.K., in part by taking control of the Deathloks, and also destroyed them, saving Lingares.[3]

Like this? Let us know!
Retrieved from "https://marvel.fandom.com/wiki/Lingares?oldid=5579137"
Community content is available under CC-BY-SA unless otherwise noted.