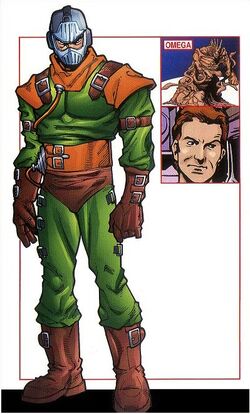 Lionel Jefferies and his brother, Madison, though they were Canadian, joined the American military. Lionel had the mutant ability to manipulate flesh, bone, and other organic components. He used his powers as a medic, but went insane during wartime. Madison, who wasn't affected by Lionel's powers, captured him and placed him in psychiatric care.[1]

He remained there until Heather Hudson discovered him and accidentally freed him. He repaid her by physically converting into a rather monstrous appearance. Alpha Flight finally caught up to Heather and Madison was finally able to get Lionel to turn his powers against himself, apparently healing his psychiatric trauma.[1]

Lionel went on to form the New Life Clinic with backing from unknown sponsors. There he began to acquire a patient base of various super-humans. He became an ally of Alpha Flight often using his powers to aid in medical matters. When Roger Bochs was diagnosed with the Bends, he was placed in Dr Jeffries care. During his recuperation, Jeffries gave Bochs new legs and a younger, fitter body.[2]

Alpha Flight soon discovered that Jeffries was not cured of his insanity when it was discovered that Bochs' legs were created using dead tissue. Jeffries' own insanity seemed to spread to Bochs as well. After returning Bochs to Jeffries care, they discover his insanity. Jeffries and Bochs merged to become Omega, capable of changing his own physical form. He mutated his brother to prevent him from stopping them.[3]

Omega battled Alpha Flight and began to absorb them. When Bochs had a change of heart, Jeffries lobotomized him. Kara took control of Omega and forced him to restore Madison. Madison merged with the Box armour and decided the only way to stop Omega was to kill him.[4]

Biokinetic Alteration: Scramble was a mutant with the ability to manipulate organic matter via touch to varying effects; ranging to physical mutation, healing of ailments and injuries, regeneration/regrowth of lost limbs, alter the minds of others and himself synapse by synapse and the switch genders from male to female with effort. He was able to use these powers on himself as well, which allowed him to temporarily cure himself of mental illness, and later to merge his physical essence with Roger Bochs' to form the entity Omega.

Biological Intuition: An unknown aspect to his powers enabled him to empathically guide his physician' hand in just about any type of physical, medical or genetic area of expertise. Among other things he could either see or feel the potential hidden within the building blocks of our DNA to bring about latent superhuman talents which lie dormant within it; be they X-gene or otherwise Lionel could tap it bringing said aspects to the surface. He could also detect any form of physical or mental ailments within a person with a glance and near perfectly identify what it was and correct it. When it came right down to it he was also a capable surgeon even without his mutant powers being capable of identifying what ailments his patients were suffering under and how best to treat them.

Fraternal Psychic Link: Scramble also appeared to have a certain empathic link with his brother Madison, the pair being able to sense each other's proximity and general state of mind.

Scramble was an excellent doctor and surgeon, thanks in no small part to his mutant abilities.

Like this? Let us know!
Retrieved from "https://marvel.fandom.com/wiki/Lionel_Jeffries_(Earth-616)?oldid=5749627"
Community content is available under CC-BY-SA unless otherwise noted.