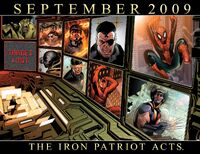 Origin
Norman Osborn made a list of to-do-things during the Dark Reign.

During his Dark Reign, Norman Osborn drew up a "to-do" list, consisting of solutions to major threats to his status quo:

Dark Reign: The List - Amazing Spider-Man #1
Add a photo to this gallery

Retrieved from "https://marvel.fandom.com/wiki/List?oldid=5662886"
Community content is available under CC-BY-SA unless otherwise noted.