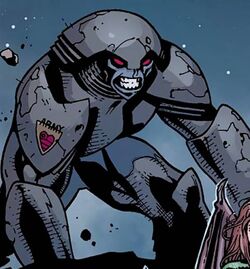 Litterbug comes from a military family where several generations had served in the armed forces.[1]

Litterbug, a mechanic in the US Army,[2] was employed in the construction of the giant mutant-hunting robot Sentinels. When his mutant powers manifested, he went AWOL.[3]

Eventually, he found his way into a small group of Morlocks living under the streets of Chicago. Using his knowledge of Sentinel construction, Litterbug helped the Morlocks rig a Sentinel unit. They used it to infiltrate and destroy a local base. Subsequently, the group fled Chicago for parts unknown.[4]

He later joined another group of Morlocks under the leadership of Masque.[5][6]

Lead by Toad, Litterbug, Dragoness, and Bliss tried to seize some of the Utopian water supply under the mistaken assumption that they were hoarding due to a shortage. They were all stopped by Iceman.[7]

He was later seen on Utopia during the Second Coming, alongside Greycrow, Random, Toad, and Sack just as a Nimrod landed, ready to exterminate them.[8] He survived and was an onlooker during the Evolutionaries' return.[9]

A few months later he clashed with the members of Generation Hope after a major sentinel attack. He and others had been stirred up by Zero.[10]

He is a competent engineer rated to work on government Sentinels as a mechanic[4] and able to construct various types of bombs such as one with a time delay digital fuse.[11]

While he does have army training he does not have any notable fighting skills.

Like this? Let us know!
Retrieved from "https://marvel.fandom.com/wiki/Litterbug_(Earth-616)?oldid=6181016"
Community content is available under CC-BY-SA unless otherwise noted.