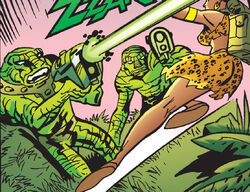 The Lizard Men from Subterranea are a race of Deviant bred mutates who were abandoned by their masters long ago. They continued to live in Subterranea with the other creation of the Deviants. Over time the Deviants became a thing of myth and were referred to only as the Ancients. They were primitive but utilized abandoned Deviant technology. The Lizard Men are larger than the average human although primitive they remained peaceful in their home and used large crystals that produced heat and light.[1]

The Lizard Men traveled through the subterranean caverns of the Earth and one of their numbers became lost in the Himalayas. They sent a scout to find him covered in fur coats and coverings, but when witnessed by the locals they believed them to be the legendary Yeti or Abominable Snowman. The scout searched high and low for his lost brother but came upon a television producer Victor Cartwright who was faking a documentary about the Yeti. The Lizard Man mistook the fur covered human as his brother and took him back beneath the surface. When he realized his mistake it was decided that he would need to be killed so their race would remain a secret. Fred Cooper, the assistant to Victor Cartwright, followed the creatures back to their lair and saved his boss and brought him back to the surface.[2]

One of their ancient Deviant masters Kro returned to them with orders to find and attack the Eternal, Makkari. They were ordered to travel to the Midnight Mountain in Borneo to find Makkari under his new guise of Hurricane as he now worked with the Monster Hunters. Makkari and his teammates, along with the Mutate Gorgilla, battled the the Lizard Men. The Lizard Men were able to capture Makkari with a Bloodhound Missile. They then took him back to Subterranea through tunnels beneath the Earth. The hero Ulysses Bloodstone followed the creatures, but they destroyed the tunnels behind them, leaving him stuck in his tracks. The team used one of the left behind Lizard Men with help of Dr. Druid's mind reading to find Kro's secret base which was beneath Monster Isle. The Monster Hunters later left the last Lizard Men under the care of Gorgilla.[4]

Like this? Let us know!
Retrieved from "https://marvel.fandom.com/wiki/Lizard_Men_(Deviants)?oldid=6393837"
Community content is available under CC-BY-SA unless otherwise noted.