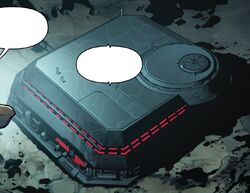 The Lock Box was an underwater containment facility for dangerous, extranormal artifacts located in the bottom of the Atlantic Ocean. Among the items in storage there was the Zodiac Key and the Carnage symbiote.

Ms. Coleman and Mr. Krane infiltrated the Lock Box's staff on behalf of Norman Osborn in order to steal the Carnage symbiote. The havoc they caused when they revealed themselves stopped the rest of the staff from preventing the Zodiac Key from breking out after it started to act up. The Zodiac Key's escape breached the facility, slowly flooding the base. Coleman and Krane proceeded to kill several staffers, including the Lock Box' warden Commander Hicks.[1]

Like this? Let us know!
Retrieved from "https://marvel.fandom.com/wiki/Lock_Box?oldid=4332369"
Community content is available under CC-BY-SA unless otherwise noted.