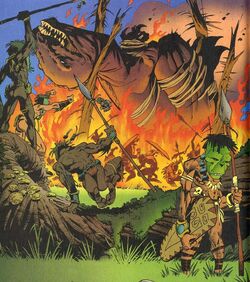 The Locot were a society of hunter-gatherers who were in a generations-long battle against the neighboring Nowek, fearful of the Nowek's advancements leaving them behind. [1]

When the Hulk killed a dinosaur that threatened the Locot, they adopted him as a new god. Their shaman sought to use him to destroy the Nowek. During the battle the Nowek were aided by Wolverine and Ka-Zar but all sides came together when a dinosaur dispatched the Hulk. The two sides came together in a celebratory feast but neither of the leaders could accept a peace between their two peoples and each poisoned the other tribes' food and water.[1]

Retrieved from "https://marvel.fandom.com/wiki/Locot_Tribe_(Earth-616)?oldid=3989217"
Community content is available under CC-BY-SA unless otherwise noted.