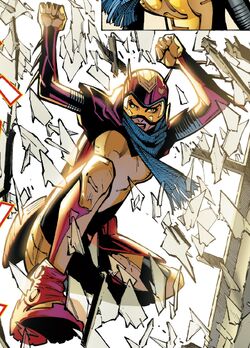 Part of a centuries-long tradition whereby a group of Aztec trackers, known as the Locust Brotherhood, had passed down the symbolic Locust Armor to firstborn sons in order to protect nomads, vagabonds, and runaways.

When Fernanda Rodriguez's mother died before bearing a son, the Brotherhood was convinced to give the girl a chance to prove herself and Fernanda then studied hydraulics and exoskeletons to significantly upgrade the ancient armor, making it bulletproof and allowing for super strength, leaps, and kicks.

After Underage Superhuman Welfare Act had been passed that outlawed superhero activity involving those below twenty-one years of age. Fernanda was arrested and her armor was confiscated by C.R.A.D.L.E..[1]But it was taken back to Fernanda after she broke out of prison.[2]

Like this? Let us know!
Retrieved from "https://marvel.fandom.com/wiki/Locust_Armor?oldid=6435831"
Community content is available under CC-BY-SA unless otherwise noted.