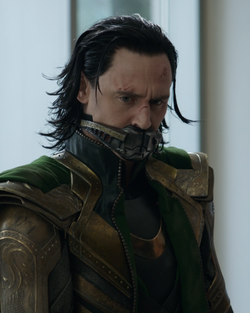 Loki Laufeyson shared history with his counterpart from Earth-199999 up until the aftermath of the Battle of New York in 2012. Following his defeat, Loki was captured by the Avengers and taken to the base of Stark Tower. When future versions of Tony Stark and Ant-Man from 2023 time-traveled to 2012 to try to take the Tesseract, their plan was inadvertently foiled by the Hulk, who knocked the Tesseract from future Tony and allowed Loki to use it to make a getaway.[1]

The same as his Earth-199999 counterpart before his imprisonment.

Like this? Let us know!
Retrieved from "https://marvel.fandom.com/wiki/Loki_Laufeyson_(Earth-TRN732)?oldid=6467907"
Community content is available under CC-BY-SA unless otherwise noted.