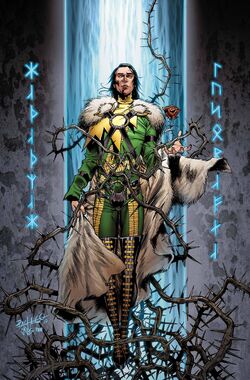 Loki was the son of Odin, and the giantess Farbauti, who procreated him as part of an attempted peace settlement between Asgard and Jotunheim. Alongside his half-brothers Balder and Thor formed the Warriors Three.[5] Loki fought alongside Thor and Balder during a thousand years-long war against the Frost Giants. After the victory of the Asgardians, the three participated in a tournament alongside other Asgardian warriors, where he was defeated by Thor while trying to make his half-brother understand that everything had changed. Soon afterwards, he visited his mother, now a prisoner of Odin, who asked him to bring her the sacred Norn Stones (relic extensions of Odin's power). In the process of stealing them, he killed his half-brother Balder with his favored bow and was banished from Asgard.[6]

Eons later, in 1939, under the disguise of Nazi super-villain Baron Zemo, Loki waged an attack on Asgard with a coalition army of Frost Giants and Nazi soldiers. He killed Heimdall, feeding his blood the the Nazi soldiers in combination with the power of the Norn Stones to augment their strength. The plan would be successful and Asgard would burn, but not before Odin banished Loki to the Room Without Doors.[7]

However, before going through the portal to Asgard, Loki had left the Norn Stones in safekeeping with a young Nazi soldier called Helmut.[6], with instructions on how to open a portal to the Room Without Doors. sixty years later, after Thor had already returned to Earth, Helmut opened the portal to the Door Without Doors, freeing Loki, who was still a god, unlike Thor and Balder who had been reborn as men.[8]

Following the failed Chitauri invasion of the world, Loki conspired with the Liberators to destroy the Ultimates and start World War III per his role as god of mischief. Using his powers over reality, Loki created the identity of Gunnar Golmen, member of the Norwegian super-soldier program and Thor's past life as Thorlief to make Thor appear insane and turn the Ultimates against him.[1] He also used his powers to frame Captain America for the murder of Hawkeye's family. His plans culminated in the invasion of the United States, where he participated as one of the leaders. Throughout this, he hesitated from using his powers openly, since doing so would enable his father to find him.[9]

Faced with his angry brother, Loki attempted to trap him in an illusion, but for unknown reasons, according to Thor, Loki's powers had begun to weaken. After surviving uninjured from a direct assault from Thor, Loki decided to simply kill Thor and all the Ultimates by summoning an army of Asgardian monsters, while battling Thor himself. At this point, Loki had lost all fear of Odin and was on the verge of killing Thor before Odin intervened. Odin sent an army of warriors of Asgard to battle the monsters and removed most of Loki's powers, making him vulnerable to Thor's hammer. Without his powers, Loki pleaded with Thor and ranted how he had been merely jealous of Thor and wanted to see him fail. He also pointed out the absurdness of his manipulations and the humor in the humans failing to realize it. Thor, not impressed, summoned a huge lighting bolt and banished Loki back to Asgard for punishment from Odin.[3]

Loki later somehow escaped Odin's clutches and launched another attack against Thor. He empowered several mortal agents and came to Earth with an army of Trolls. His goal was to antagonize Thor to the point where Thor would lose control and destroy the Earth. He nearly succeeded when he killed Valkyrie, Thor's mortal girlfriend whom Loki had empowered. Hela, tired of Loki's games, restored Valkyrie to life as a real Valkyrie, who then killed Loki. Loki was sent to Hel, but immediately began plotting his escape.

Loki either escaped Hel or was at some point revived by Odin when Asgard came to Earth. During the attack of the Children of Tomorrow, Loki died in battle along with all the other Asgardians, except Thor, who is now also the Valhalla, being able to see his ghost and the other Asgardians', and his nephew Modi.

Loki's strength is at least equivalent to Thor's when there are multiple copies of him due to his Asgardian/Jotunn heritage, otherwise it can be assumed that he is weaker than Thor physically.

Loki is bound by limitations place on him from Odin preventing him from outright using his powers to kill Thor or humans, he seemed to temporarily be able to use his powers at full capacity but it can be assumed that the full use of his power led Odin to be aware of his location and he started to lose his powers.

Like this? Let us know!
Retrieved from "https://marvel.fandom.com/wiki/Loki_Odinson_(Earth-1610)?oldid=6192100"
Community content is available under CC-BY-SA unless otherwise noted.