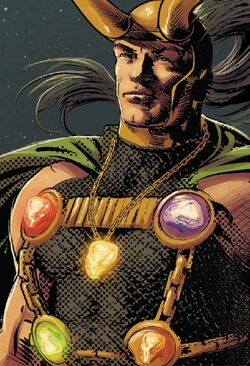 In a reality adjacent to Earth-616, the chivalrous Loki Odinson wielded Mjolnir and possessed the Infinity Stones. During a battle against Devondra for the fate of the universe, Loki got knocked through the barriers of reality and landed on Earth-616, where he stumbled into his counterpart, Loki Laufeyson, who was investigating the God Quarry. After sneering at the differences between himself and his counterpart, Odinson opened a portal to return to his world and continued fighting Devondra.[1]

Some time later, Requiem defeated Loki while Asgard burned, and killed him with his own hammer before taking the Infinity Stones in his possession for herself.[2]

Like this? Let us know!
Retrieved from "https://marvel.fandom.com/wiki/Loki_Odinson_(Earth-18897)?oldid=5794282"
Community content is available under CC-BY-SA unless otherwise noted.