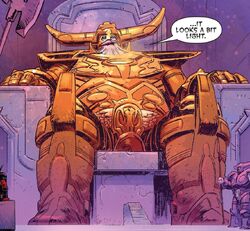 King Lokk was an alien being with whom Deadpool made a deal to arrange a planetary threat for the Earth in exchange for payment in an unidentified alien currency. The threat arrived in the form of Groffon the Regurger, a being whose choice for destroying world was disturbing and embarrasing, the council King Kokk belong to was easily persuaded to sacrifice him. After successfully fending off Groffon's invasion, Deadpool met up with King Lokk and gave him they payment. He tried to get a discount before being teleported away.[1]

Like this? Let us know!
Retrieved from "https://marvel.fandom.com/wiki/Lokk_(Earth-616)?oldid=4575495"
Community content is available under CC-BY-SA unless otherwise noted.