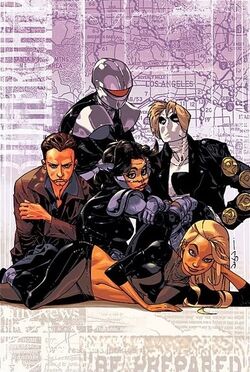 Origin
Mickey and Phil started Excelsior as an outreach organization for former and current teen heroes.

Mickey Musashi never wanted to be a superhero, but a series of circumstances and a sense of begrudging responsibility caused her to walk that path for years as part of the New Warriors. Eventually she realized just how dangerous her 'hobby' was, and quit for good, joining her fellow former teen hero Phil Urich,Green Goblin, (the only heroic Green Goblin) as a reporter for the Los Angeles Times.[1]

Musashi and Urich conceived Excelsior as an outreach organization, a 'support group' for teen heroes. Mickey contacted a number of former team heroes, and their first meeting was at a church in Los Angeles (which was interrupted by a phone call from a 'mysterious benefactor' who offered the team $1 million to hunt down the Runaways and "get them off the streets".) This story coincided with the Runaways bringing new member Victor Mancha into the fold, who it was discovered was Ultron's son. It only took the return of Darkhawk, after a mental breakdown, to defeat Ultron.

The last the team was seen, their "mysterious benefactor," now revealed to be Rick Jones, had asked them to continue their hero duties as the "experienced" team on the West Coast. It was also revealed that Chamber was in fact the reincarnated Geoffrey Wilder, sent by the new Pride to spy on the latest Los Angeles-based team.[2]

While the group was intended to help each other refrain from using their powers and try live normal daily lives, many of them tended to 'fall off the wagon' and use their powers anyway. Specifically, when Mattie Franklin (Spider-Woman) found out who took her DNA to produce MGH, she enlisted the help of Darkhawk and went to find out more information. Darkhawk, who just wanted to use his powers again, ruined their cover and they ran into a woman named Nekra Sinclair who seemed to be held captive by the MGH producers.[3]

The Loners continued their original role as a support group of former teen heroes and people with an 'addiction' to the hero life, and helped Darkhawk when he lost control of his armor during his time working for Project Pegasus. Darkhawk eventually left the planet and became involved in the War of Kings.[4]

The known remaining members of the group, (Hollow, Lightspeed, Ricochet, and Turbo) joined the Avengers Academy, once again becoming heroes.[5]

Transportation: Excel - Quinjet prototype modified by Tony Stark to be controlled in the same manner as the Green Goblin's Goblin Glider.[11]

Retrieved from "https://marvel.fandom.com/wiki/Loners_(Earth-616)?oldid=5548500"
Community content is available under CC-BY-SA unless otherwise noted.