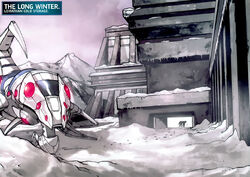 The Long Winter was a former KGB base used by Leviathan.[1] At this base a hundred thousand of the Soviet Union's most loyal men and women were put into cylinder-like chambers. Augmentation/rejuvenation devices that could keep those inside in stasis for centuries. They could also super-charge the individual, turning them into meta-humans with abilities matching or surpassing someone from the American super-soldier program.[3]

Strucker with a force of ninjas from the Hand attacked the base at the moment that Leviathan was activating the chambers, and stole the Brood power source they were using. Disrupting the process, which caused many of those inside the chambers to horribly mutate. Magadan was unable to awaken the men, therefore Leviathan.[3]

Decades later, the Brood power source was retrieved from Hydra by their sleeper agent in both S.H.I.E.L.D. and Hydra, the Contessa Fontaine. With it the men in the chambers were thawed out, kicking off the Hydra-Leviathan War. Hydra tracked Contessa Fontaine's jumpship to Russia and when their force arrived at the base, the found that it had been abandoned.[4]

Like this? Let us know!
Retrieved from "https://marvel.fandom.com/wiki/Long_Winter?oldid=5469051"
Community content is available under CC-BY-SA unless otherwise noted.