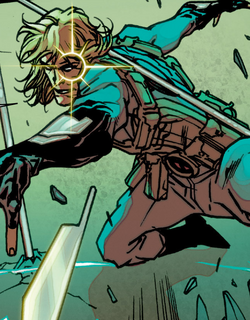 Longshot was with his teammates at the Blackbird when they received a telepathic message from Baron Grey to help the other X-Men during an ambush by Genosha's Press Gang.

Longshot noticed that their friends were being possessed into fighting them, so they located the source which ended up being Karma, but she was able to gain ahold of Tempus and used her abilities allowing the Press Gang time to escape the scene sucessfully with their hostage Triage.[2]

Longshot was part of the rescue team put together by Phoenix in order to infiltrate the island and get their people back. Since he was from another dimension, Longshot could not contract the mutant plague making him an ideal chose. Arriving in Hammer Bay, the X-Men dispersed from the Blackbird and engaged the Press Gang. This provided a distraction so Longshot could sneak into the lower levels to rescue the others from their cells.

He took out some Magistrates until he ran into some resistance in the form of Rictor, who blasted a vibrational shock at the ground causing an earthquake but Longshot flipped over the rummage and threw some paralytic tipped blades at Rictor which rendered him unconscious, which allowed him to free the others.[1]

Finding out the discovery that Cameron Hodge was brought back to life. Longshot ran straight at him while throwing his knives hoping that it would put Hodge down, but he started to fire optical blasts at Longshot but he easily dodged it with his enhanced agility.

During the fray, Havok, Wolfsbane, and Bombshell sacrificed themselves by flying the Blackbird straight into Hodge as Bombshell and Havok used their abilities to create a huge explosion killing Hodge once more. Longshot was with everyone as they mourned the death of their comrades.[3]

Seemingly those of the Longshot of Mojoverse.

Seemingly those of the Longshot of Mojoverse.

Like this? Let us know!
Retrieved from "https://marvel.fandom.com/wiki/Longshot_(Earth-24201)?oldid=5673408"
Community content is available under CC-BY-SA unless otherwise noted.