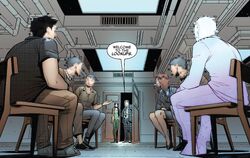 The Lookups was a support group initiated by Edwin Jarvis for friends and loved ones of super-powered individuals. They hold weekly meetings at Saint Joseph's Church. WHO-VER 5.0 drones donated by Tony Stark project face-obscuring technology to protect anonymity, and a gaseous potion created by Doctor Strange clouds certain kinds of memories to prevent remembrance of specific details concerning another member's identity.

After returning to New York, Carlie Cooper began to attend Lookups meetings to ease the weight of knowing Spider-Man's identity. She approached Mary Jane Watson, who had recently restarted a relationship with Spider-Man, and introduced her to the Lookups. Mary Jane attended a meeting that day, and was welcomed by Jarvis. He encouraged her to observe a meeting since she was reluctant to join,[1] and she later spoke to the group before they adjourned.[2]

Like this? Let us know!
Retrieved from "https://marvel.fandom.com/wiki/Lookups_(Earth-616)?oldid=5622131"
Community content is available under CC-BY-SA unless otherwise noted.