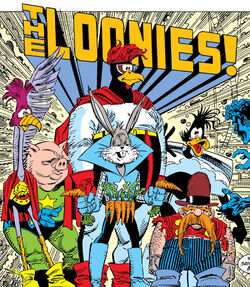 A group of robots that Arcade had built while imprisoned in Crossmoor, which he ordered to capture Excalibur and transport them to another custom built world. They transported them in specially designed Carrot shaped containers, that counteracted the powers of the member of Excalibur inside.[1]

At the custom built world for Excalibur, Shadowcat had to be dumped down her chute as her container broke, but the rest of Excalibur are to be released down their chutes as one. They put the lids on all the containers, and eager to please, Tailgunner rigs up the dynamite and tries pushing the plunger, but nothing happens. As the Loonies stand back, Gums fires a carrot shaped gun, which fires an energy pulse into the dynamite that ejects each member of Excalibur into their chute, although Widget and Lockheed share one chute together. As Excalibur start to experience their worlds, they have to strap Captain Britain into a virtual reality machine as his chute breaks.[2]

Later, as Meggan escapes from her world, Arcade tells them that someone is interfering with the worlds, and they need to stop it, so they set about hunting for the perpetrator.[3] However, Kitty sends them to sleep for a while, and when they reawaken, they find that Excalibur are all free. They burst into the Emerald City and on the orders of Arcade, try to kill Excalibur. However, as they attack, they are destroyed by Kitty’s 'Merry Maladies'.[4]

Retrieved from "https://marvel.fandom.com/wiki/Loonies_(Earth-616)?oldid=4974036"
Community content is available under CC-BY-SA unless otherwise noted.