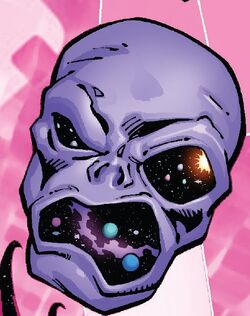 Lord Chaos and Master Order exist together in the cosmos as agents of the universal balance, being personifications of respectively Chaos and Order.

Chaos was allegedly the sire of Ghoul-Hyena of Chaos, who lived under the Black Sphinx of Nebthu, fashioned after him, in Stygia.[3]

Peter Parker and the Radioactive Spider

Master Order and Lord Chaos claimed responsibility for making Peter Parker become Spider-Man so that he could play a key role in the final battle between Adam Warlock and Thanos over the Soul Gems.[4]

Thanos and the Infinity Gauntlet

The Lord Chaos of Earth-616, as well as its alternate reality counterparts, was destroyed by the Beyonders on their quest to annihilate the Multiverse.[7]

When the Multiverse was recreated,[8] the cosmic entities returned to life, including Lord Chaos. Lord Chaos and his brother Master Order became disgruntled by Galactus' evolution from a force of destruction to a force of creation, arguing he threatened the cosmic balance.[9] They eventually put Galactus on trial before the Living Tribunal. The Tribunal ruled in Galactus' favor and allowed him to remain in his new form, claiming that the universe being in a new iteration meant the cosmic hierarchy wasn't established anew. Master Order and Lord Chaos took this council to heart, and murdered the Tribunal in order to take his place as the personification of multiversal law.[10]

They attempted to turn Galactus back to his world-devourer form. However, for the same reason Order and Chaos could kill the Living Tribunal, they couldn't stop Galactus from fighting back his transformation. If there wasn't a hierarchy yet, it meant Galactus was also on the same level as Order and Chaos, so they couldn't impose their will on him. Because of this, Order and Chaos sought their servant, the In-Betweener, and forced him to become the uniting force in a fusion that combined Master Order and Lord Chaos into a single being, the self-proclaimed new order, Logos.[11]

Logos would eventually be defeated and split apart into the individual beings that composed it by the ascended astral form of the Black Panther. Both Lord Chaos and Master Order would later be confronted by the reborn Living Tribunal for their misconduct.[12]

Like this? Let us know!
Retrieved from "https://marvel.fandom.com/wiki/Lord_Chaos_(Earth-616)?oldid=6438649"
Community content is available under CC-BY-SA unless otherwise noted.